It’s tax return season, and for me that typically means putting some money aside for saving, and then picking up some of the larger items on my wishlist. That Zur the Enchanter deck I wrote about recently was one big buy. Monster Hunter World was another (I rarely pay full price for games) and I just shared what happened with that. The last thing that was on my list was a new monitor for my PC.

A few months back I spotted this monitor at my local Costco, and snapped a photo of it. It looked amazing, but I wanted to read some reviews and ask around before pulling the trigger on it. The idea of having a huge wide screen monitor has always appealed to me, and having used a 32″ LCD TV as a monitor hasn’t been doing this gaming rig any justice. The reviews turned out to be pretty positive, and even my Dad approved on the item especially due to its low cost. At $279.99 it felt like a steal. It is a 2K resolution monitor though it is still only 60Hz which is slightly disappointing. It has some sort of software acceleration though, as I benchmarked it with Doom and I held a steady 75 FPS at the higher resolution. That game looked simply glorious on it and buttery smooth. 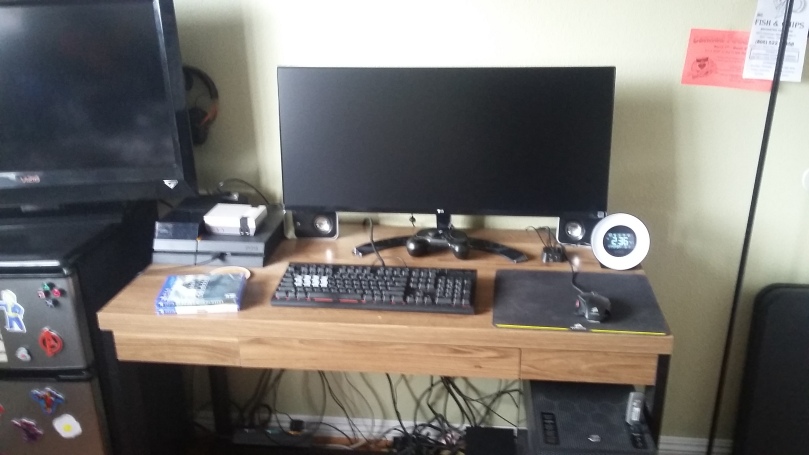 It took me a bit of time to sort out what wires I needed to disconnect and whatnot to get the new setup ready. I had already sort of preplanned this out but it still takes effort to get any new piece of hardware sorted out. The idea was to move my TV off of the desk and stand it nearby while clearing the way for the new beauty. Despite the monitor being a 34″ class it still feels like I gained desk space, mainly because the bezel is so thin compared to the TV. Overall I love it so far, and I’ve downloaded the screen splitting software that I look forward to trying out. Perhaps I can do two things at once on one monitor now, without having to switch inputs! Since I’ve separated my PC from the TV, the latter’s job has become full-time console duty so I can also utilize either for gaming or watching, so I do have two screens near each other, finally. I think this will end up being helpful since my girlfriend and I won’t have to share the one screen anymore. Speaking of my lovely lady, she randomly picked me up another retro game console to add to the collection — joining my NES classic and hopefully soon I’ll have the SNES classic as well.

I remember hearing about this little retro Genesis console which released last November but apparently some of the negativity revolved around early release versions that had shitty firmware installed, at least that’s what Kotaku reports. Either way, thankfully the system that she picked out ended up being the revised version. Initially I thought this might have been a bit of a waste, given Sonic’s Ultimate Genesis Collection that I’ve had on my PS3 for a few years. You can see in that old post that there were 48 titles included in that collection, most of which were first party Genesis titles, and a few additional Master System games. It was all I needed at the time, but it’s clear with the addition of these mini-consoles I have too many to have hooked up at any given time, and I’m not likely to unpack my PS3 anytime soon to play. Let’s just say that this gives me pretty much the same collection in a slightly more convenient package.

It’s small, but it’s not nearly as small as its Nintendo counterparts. Still, it manages to pack a punch. The system runs emulation software and came with an impressive list of games. As I said there were many that I already owned on that PS3 disc, but there are some other games that are new. Some I’ve never even heard of or played before, so that’s pretty sweet.

The system feels a little light and hollow, but it does have a working cartridge slot (though I have no intention on hunting down any). The controllers are wireless which is nice, but run on batteries which is not so nice. They too feel a little light and hollow but functionality seems fine. Not only does it include 45 Genesis games, but also 14 Master System titles and 7 Game Gear games. I was actually impressed by the latter, as I owned a game gear and at least a handful of those titles! 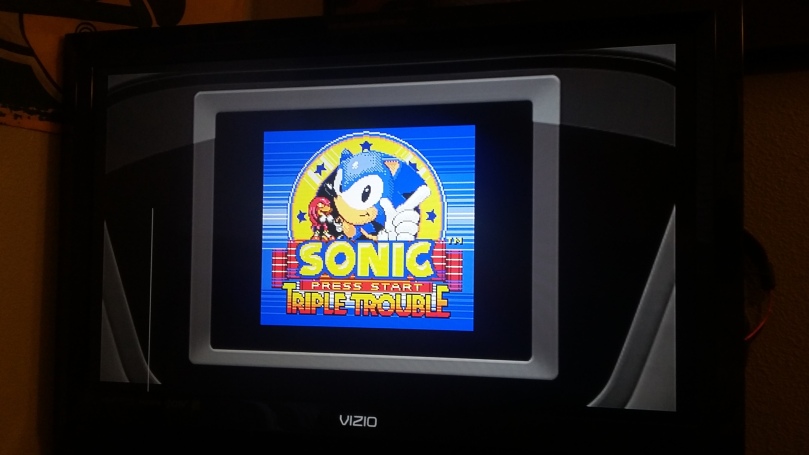 The emulation for the Game Gear titles is serviceable as well, though the resolution is a bit tiny as seen above. Still a cool addition for a long dead console group. I have only tried out a few of the titles thus far but am looking forward to sharing them with the family in the weeks to come. I’d recommend this little piece of hardware if you were a big Sega nut like myself, particularly if you don’t own any of the original games/systems or copies of these games on Steam/elsewhere. I’d also recommend the LG34UM61 monitor if you happen to be in the market for a budget upgrade!