Back in February I attended a sanctioned Commander event at a local game store. It was fun enough, and the packs earned were worth the cost of entry so my roommate and I decided that we’d check it out again. We haven’t had the same sort of time on our hands in recent months so we aren’t playing Magic nearly as often as I would like, but we’re still trying to find time to play on occasion. Yesterday afternoon we attending the same Commander event at the same LGS and it ended up being better and worse than the first time. Let me explain.

So the first time we went, there were two other guys that had shown up and we ended up in a pod of 4. That’s pretty much the standard setup for playing EDH, so it was fine. The benefit there was having the additional players, but they ended up being either under experienced with the decks they brought, or they were simply bad players. This time around, my roommate and I were the only ones who showed up so the shop keeper played the “official” rounds with us. This was beneficial because we were able to stretch the format a bit, and we played less rounds before determining the winner. He also happens to be a pretty good player with a fair amount of decks so the competition felt more real and the games were all good games. Here were our commanders:

This time the rules were a little more lax. Typically you only get to play one deck for three rounds. This time he said that we could swap decks in between rounds, and that we’d only do two rounds. So I rolled with my newly minted Zur the Enchanter deck, the store owner played Sram and my roommate used Mizzix. I am familiar with both of those decks because it was my roommate’s first EDH deck, and I pilot a Sram deck so I already knew he was going Voltron. I was less familiar with my own deck however, only knowing what it wants to do but not sure how I was going to adapt to situations that arise during games. Luckily, I had about the best turn 1 ever, dropping a swamp into a Sol Ring which I tapped to play Talisman of Dominance and then ended up tapping that for one white mana (taking 1 damage) to play Authority of the Consuls. Yeah, it’s about as good as it could go. Turn 2 I dropped a Swiftfoot boots, cast Zur and equipped the boots, attacking and tutoring out Empyrial Armor and hitting for 7 damage off the bat. It was over as soon as I tutored up Ethereal Armor and Phyresis, I one shotted the store owner with 11 infect damage and two turns later my roommate dropped too. We all decided to swap decks for round 2: 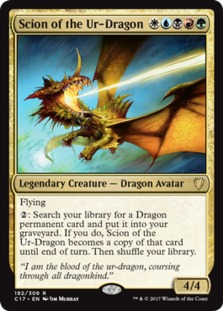 I pulled out Kumena which was the last deck I finished prior to Zur, and had only played one time. My roommate pulled out the tried and true Scion deck, and the owner was on a Titania kick. He ended up stomping us pretty readily, having crazy ramp and reusing strip mine to murder our mana bases. I was pretty impressed by the deck. At that point it was decided that I was the winner based on having won a game (don’t think the shop keep counted his own results) and votes. So I earned 3 packs of Rivals of Ixalan and my choice of a promo card. I went with Unclaimed Territory, as pretty much everything else was hot garbage. It’s a nice foil with a watermark: 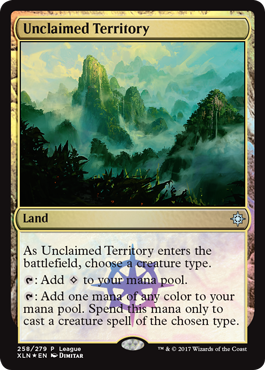 We played one more game for fun where I used Zur again, my roommate kept on with Mizzix and the owner went with a Queen Marchesa deck. It was a pretty good game. I didn’t have the same God hand, and each time I cast Zur they would get rid of him due to the fact that I didn’t get early hexproof or shroud. I managed to get a decent recursion engine going but then my graveyard was exiled and I was merely top decking (I believe I had more recursion in my hand that wasn’t useful). I ended up with a decent board state when my Starfield of Nyx triggered and all of my enchantments became */* creatures equal to their CMC, but a well timed Cyclonic Rift put everything back into my hand and I couldn’t recover from there. Surprisingly my roommate managed the win even after storming up to 60 life, and attempting to kill the shop keep with 50 damage, which was countered by a creature that blocks all the damage and gets +1/+1 counters based on the damage. So my roommate dropped to 10 life and the owner ended up with a 51/51 soldier on his field. I got rid of it before dying and my roommate managed to  pull a burn spell and kill the owner.

Good games all around, but less fun because 3 person pods are just not the same as 4. Apparently they are switching to a league format at some point next month, so we’ll probably go back and see how that changes things.