The second episode of The Enemy Within kept up with the pace of the first. Bruce is trying to infiltrate “The Pact,” which is a super villain group consisting of John Doe (Joker), Harley Quinn, Mr. Freeze and Bane. As Bruce, you’re playing both sides trying to act like the bad boy rich kid that’s finally following in his father’s footsteps while still working with Gordon (GCPD) and Waller (FBI). Waller has tasked you with trying to stop this group, while you have kind of left Gordon in the dark. Your relationships with the main characters seem to adjust to what you do in the game, and clearly I’ve adjusted them compared to the first episode: 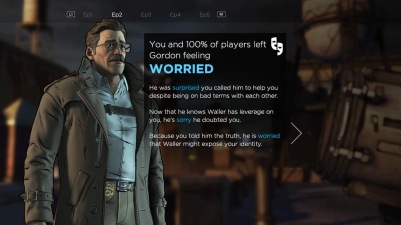 Playing both sides is difficult, because you have to make the villains trust you, while still trying to stop them. This means communicating with Alfred and Waller via your tech while keeping that on the extreme down low when around the villains.

There were several key choices to make in this episode, and for the most part I went along with the majority of players. I had to sneak into Wayne tower to get the Phalanx key for Harley, but of course John and her had to accompany me. Thankfully Tiffany (Lucius’s Daughter) was able to give me the key and keep her mouth shut, but this means that the villains would get closer to their goal. The episode culminated with the police trying to stop the group, and there was a major choice to try and stop either Bane or Harley from killing cops, and I chose to go after Bane thinking it would help my relationship with Harley, but instead she gets left behind and is pissed. I’m sure I can smooth things over with her in the next episode.

Overall this series has kept me hooked. At this point there’s only a couple more to go before I have to wait for the last episode to release but I think it was a worthy purchase. If you have plus and didn’t play the first season I’d recommend doing so then do yourself a favor and play this one as well. I didn’t think Batman would be a fun series but it’s been great!