Dying Light was unfortunately released at a time when the zombie genre was over-saturated. I have been into zombies as a device to move stories forward for a long time starting with cinema. For a couple of decades now, if a movie has a premise that involves post-apocalyptic zombie scenarios I’m in. From the classic George Romero movies to newer franchises like 28 Days Later, zombie movies are a hoot. In the 90’s, titles like Resident Evil moved the theme over to the video game platform, and though it took a while to gain steam, at this point there are hundreds of zombie themed games. From realistic, gritty horror set pieces to cute, cartoon brain-eaters ala Plants vs. Zombies — the genre has no shortage of variety but once you’ve played a zombie game you’ve played them all so to speak. 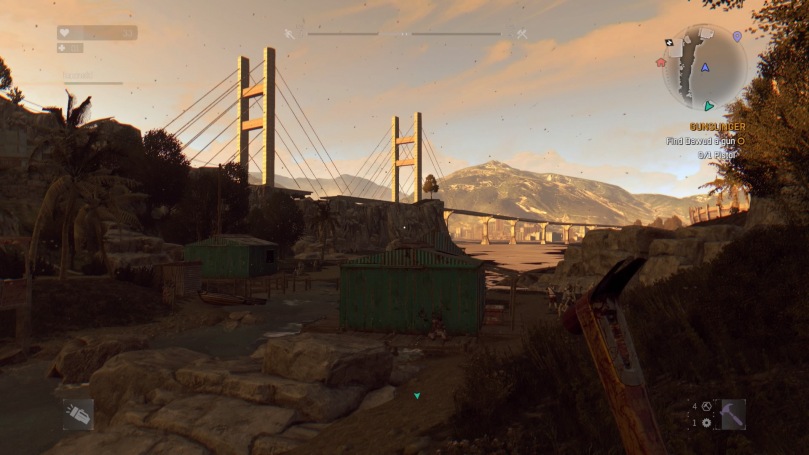 I remember hearing about the game when it released and it sounded like more of the same. It’s a first person shooter, survival horror style game, with a big open world to explore. The major gimmick that set this title apart from its competition was the fact that there are parkour movement mechanics that really open the world up and let you explore vertically. It sounds funny when you talk about it, but it does really help you get around and the more that you get adjusted to it, the better you’ll get an climbing and jumping from rooftop to rooftop. There are even multiplayer challenges peppered about that focus on this one aspect of the game: 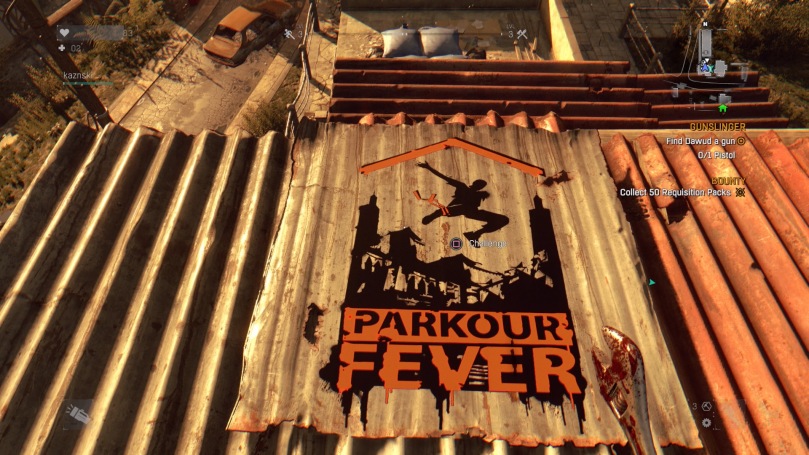 The reason that I ended up getting this title three years post-release was for one main reason: Co-Op! My best friend and I haven’t been gaming together much in the past few months, mainly because the games that we were playing fairly regularly in the past were completed (or we just haven’t been playing them anymore). My girlfriend was asking me the other day why we didn’t play together anymore and I told her that we didn’t really have anything co-op to play and so when we visited him last weekend she decided that we’d all go to Gamestop and find something to play together. This one jumped out at me, as we are both Resident Evil fans and enjoyed playing 5 & 6 co-op so I thought this might fit the bill. It also helps that it was cheap and the bundle that we picked up included all of the DLC for the game as well. 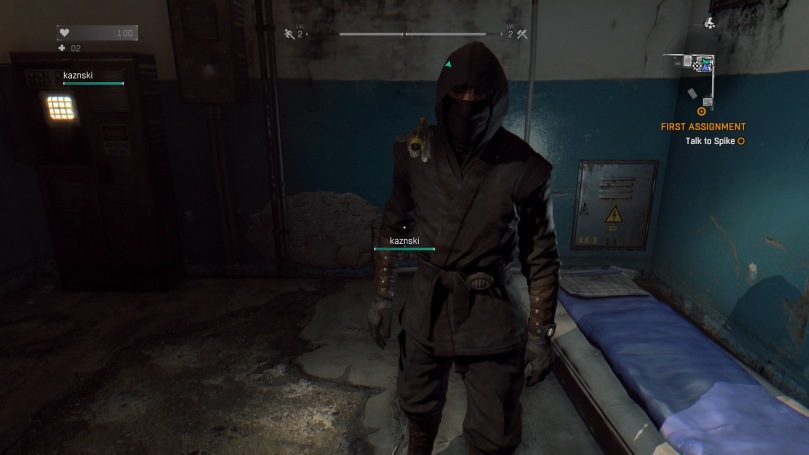 One silly thing that happens when you play a co-op game of this nature together is that everyone is essentially playing the same main character despite being on a team. The game was designed with co-op in mind but they clearly didn’t add other characters to the fold so we both ended up being the same guy in the same clothes. You have to play through a tutorial section before you can host or join games, and then at that point the player stash in safe houses has additional costumes that can be worn so you can differentiate yourselves a bit. My friend ended up looking like a ninja, and I went with a secret agent suit. Many of these costumes were present as part of DLC bundles, but you’ll find drops throughout the game as well. 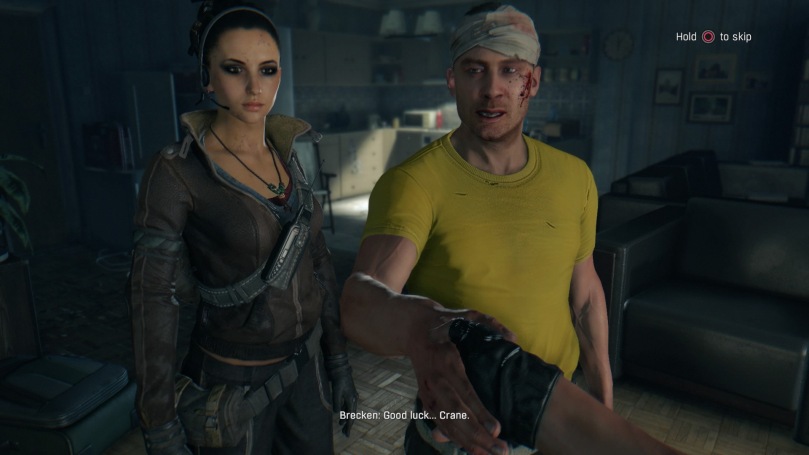 You play a character named Crane, who is dropped into this infected area to find survivors and infiltrate their group. It seems you are working for someone else, and you might not be a good guy, but the story hasn’t unfolded far enough yet for me to tell what you’re really up to. You do work your way into a group and meet their leader (above) who sends you on various missions to advance the story. The central hub is a location called “The Tower” and you’ll run into other NPCs who will give you side quests and there are even bounties on a bounty board. Standard open-world/RPG stuff here. 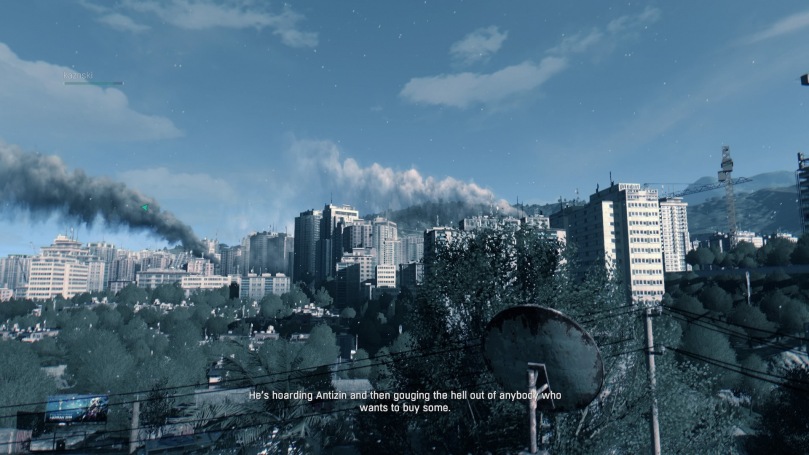 It’s hard to say where in the world this is taking place. The names of characters sound middle-eastern, but you’ll run into all nationalities. Some of the accents sound South African. I can’t really place the real world locale, but perhaps this is just supposed to be its own world? 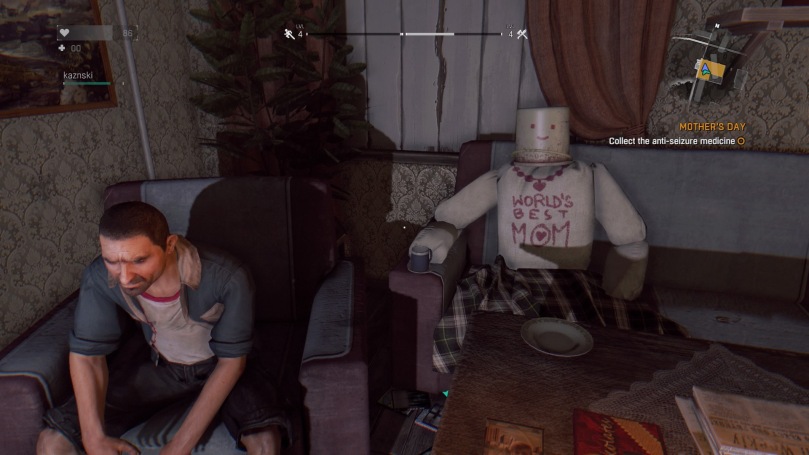 You’ll run into a variety of interesting characters as well, including this shut-in who has gone crazy but apparently really loves his mother. Gameplay consists of running, jumping and climbing around this city and mainly using melee weapons that you find in the world to bash in the skulls of nearby zombies. There are the general slow movie zombies and then some that move faster, some that can climb onto rooftops, and “nightmares” that come out at night and remind me of Resident Evil monsters. 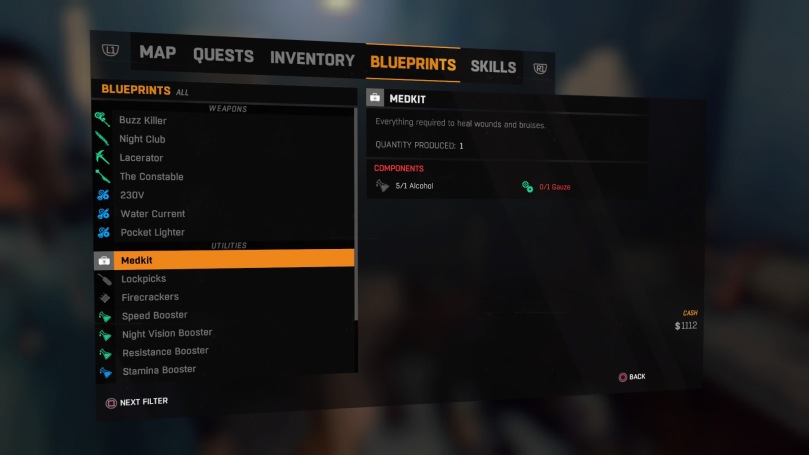 The crafting system is similar to most games, you’ll find various items in the world, can break down items into base parts, and can even pick up some plants to make into more useful items. More blueprints are found in the world, and depending on skill point choices you’ll open up new recipes. Speaking of skills, there are various trees that you’ll earn points in that will help you mold your character to fit your play style: 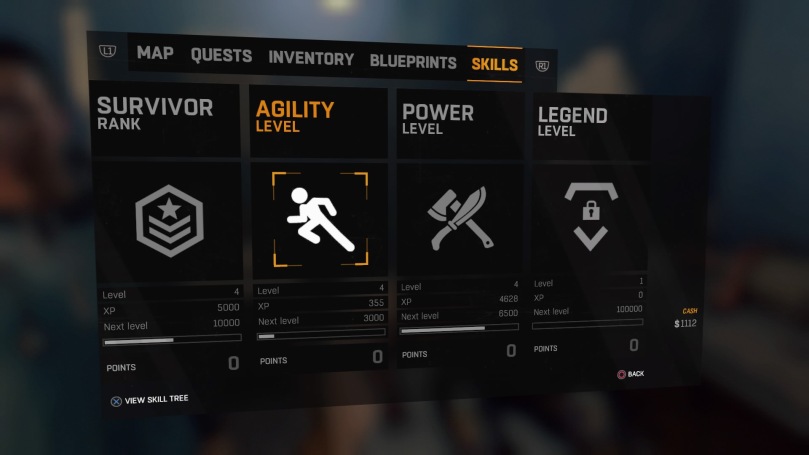 I’m not sure how to open up the Legend tree, but I assume that comes later in the game. The Survivor, Agility and Power trees are available from the start, and you’ll earn experience by doing different things. Survivor seems to be the main leveling tree and gains experience pretty quick, has skills to open up new recipes and extra backpack space. You’ll gain Agility XP for climbing, running and jumping, and the skills in the tree have to do with this. Power is your combat tree and goes up as you kill things, also opening up additional combat skills. 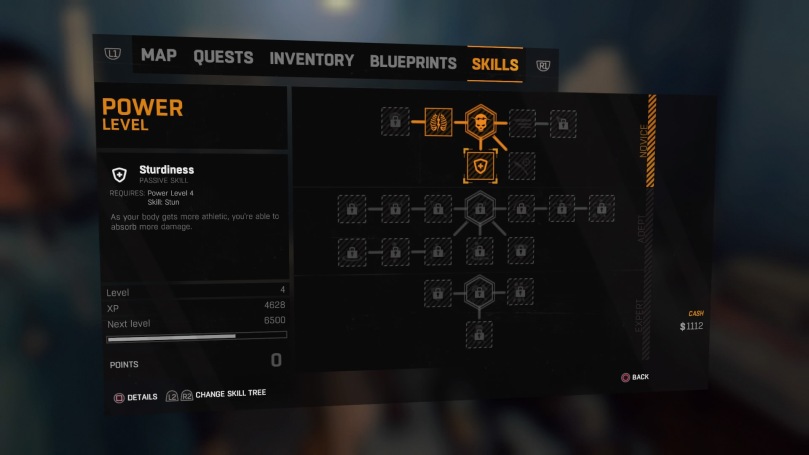 Each tree has its own theme but also has the standard “open up this skill to open up the next” style of unlocking, where some parts of the tree branch in separate directions and you’ll have to choose where to go. After a certain point threshold is met you’ll open up new parts of the tree that will have further branches to explore. I ended up using points to upgrade my backpack space and my health, along with new recipes for “boosts” and the ability to slide across the ground along with vaulting over zombies. My friend ended up going the drop kick route which can end in some hilarious physics during combat:

The game I’d most compare Dying Light to is Dead Island. The latter title lacked the parkour elements but had the same sort of large open area where you’d complete quests, a leveling system and a mostly melee based combat system. It does appear that there are guns in this game but they aren’t exactly growing on trees at this point. Similar to DI, you’ll have to watch your weapon’s durability, as they eventually break and have to be repaired. You could also compare this title to things like Fallout, but obviously there’s less shooting going on, and more zombies. I’d recommend this title to anyone who enjoys FPS titles, particularly the zombie kind. If you enjoyed the Dead Island series you’ll like this game as well. Or, if you just need some co-op action in your life, give it a whirl!