There isn’t much else to say about this series that I haven’t said. It plays like its predecessors, it continues the story from the first season, and you can affect individual characters more deeply than in other Telltale games (or at least it’s better tracked here). By the end of this episode I had positive results with all of the characters except for Waller, and she was only mad because I sided with John Doe, and honestly at this point I can’t remember exactly what the climax was because I played this episode at least a week ago. 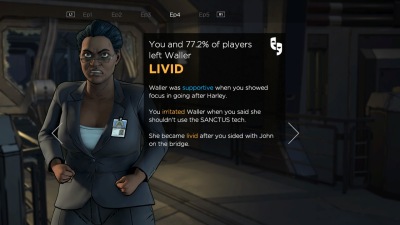 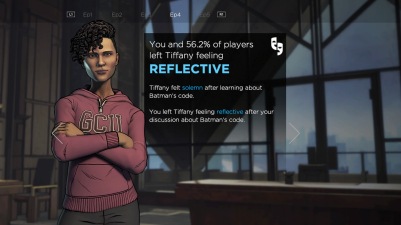 What’s most interesting here is that I set John down the path of being a “vigilante” like Batman. He vowed that we would both clean up the streets of Gotham. I don’t remember anything like this in Joker’s origin story, but I would assume that he will be picking up that moniker sooner rather than later. How Joker will end up being a vigilante I’m not sure, he’s always been a villain to me so I’m not sure how this will pan out. What I suspect is that he will be crushed when Batman tells him that he works alone and will be hell bent on taking out his frustrations on Batman as the Joker — or at least that would help this story to line up with the overall canon we all know. As I noted last episode, this episode had even less major choices in it, and here are the two that they tracked:

Despite Mr. Freeze being a villain I showed a little mercy as Waller’s crew was basically going to kill him. I doubt that will change things between us, but I figured Batman wouldn’t be that cruel hearted to ignore his pleas. After the big climax event of the episode, I let John go off to find Harley himself as she managed to run off. That’s all there was for big choices this time around and that isn’t really indicative of what’s happened throughout the whole episode but it is what it is.

The 5th and final episode of this season isn’t out just yet, but I imagine it will be soon enough. I’ll return then to finish off this blog series. Stay tuned.