I didn’t hear about The Council while it was in development. I didn’t even know it had released, but spotted it on the Playstation Store recently, and was intrigued by this lead photo. Clearly there are some historically impactful people in that picture, and I was interested to see what it had to offer. The description of the game led me to believe that it was a “choices matter” style of narrative adventure, and this is what you can expect. You could point to similarities between this title and the variety of Telltale Games’ well-known series, but honestly it’s more akin to Monkey Island than any of their recent titles. Still, it can be said that if you enjoy Telltale’s narrative style you will probably enjoy this game and  your choices do matter. However there is a bit of depth added to this game that wasn’t present in many of TTG’s. First of all, you’re given the ability to choose a class: 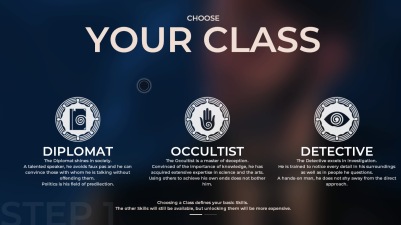 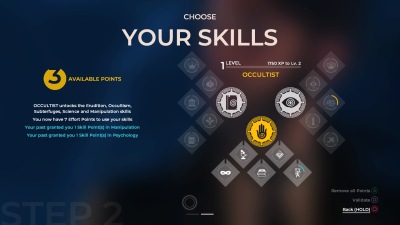 I rolled with becoming an Occultist because it sounds rad, and honestly it doesn’t really matter which one you choose due to the fact that your gameplay (choices) can open up the other options. Furthermore, you’re presented with a set of skills based on your class, all that will start at level 1. You can further level these skills using points granted to you as you gain experience. Different actions you take within the game accrue this experience, and it is given to you when you complete “quests.” These are quests as you would think of them in the RPG sense, because you are only walking around from room to room scavenging for clues and having the periodic conversation with the other characters. But things are tallied up at the end of these quests and you’ll gain more points to acquire more skills. Some can be later unlocked by reading books and performing actions so then you can put your leveling points into those as well to open further actions and dialogue options. The game will point out when you lack a certain skill and you’ll know that you’ve missed a certain path that could have been taken if you had it.

There are parts that require your attention, such as puzzles and conversational battles of wits. Confrontations only allow you to make so many mistakes, and your dialogue options will change as your skills do. You have an effort bar that will be used to perform certain actions or use dialogue options that pertain to skills and there are consumables to refill this bar (and remove negative conversational effects). I guess this is starting to feel more like an RPG after all! Opportunities are more like the QTE’s you’d be familiar with from Telltale games. They do help you on your way though so you should be paying attention while you play this game. 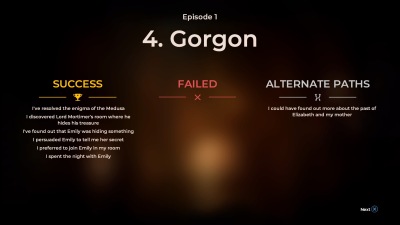 At the end of your missions, aside from gaining XP and being able to spend your points, you’ll also get a breakdown of ways you succeeded and ways that you failed during that quest. Alternative pathways are also presented, presuming you’d want to play through another time. I was halfway tempted once I saw the trophy list, as many of the achievements will require additional playthroughs, but I believe I’ll wait until I’ve played through the additional episodes. It’s an intriguing political romp, where you’re rubbing elbows with the people who rule the world in their day and age. I won’t spoil anything as this is a fairly new title, but it was very enjoyable and I look forward to more! It’s unclear at this point as to when episode 2 will release, but if we typically expect episodic content at a fairly rapid clip I expect you’ll hear more about it from me within a couple of months. The Council is also available on Steam.