The LGS I have been going to in recent months for Commander events has recently changed up their format. Since the beginning of this month they are calling it the “Commander League” and rather than getting prizes at the end of that particular day, they are now tallying points up throughout the month and awarding prizes at the end. Also, instead of three round events, they are having a couple of rounds starting at different times on both Fridays and Sundays. Instead of paying an $8 buy-in there is now a $5 per round fee, so essentially the shopkeeper is making money hand over fist and will only really pay out one person at the end. At least that’s the gist of it, I’m not sure if there are prizes for 2nd or 3rd place, or if there are any participation packs for others. I know that he’s got some sort of Unstable art poster as a prize, but otherwise who knows. My roommate and I have been cool with paying the nominal fee just to have others to play with, so we’ll likely pop in again, but so far we have only participated the one day, this past Sunday.

We showed up at 2pm when things were supposed to start, but unfortunately no one else had shown up to that point. It seems he was having the store championship for Rivals of Ixalan, so the people that were there were present for that. The 2nd round of EDH games was due to start at 3:30, so we decided to go get some lunch and come back. When we arrived the second time, the two guys we played with the first time we attended one of these events were there, so we managed to have a four player round. The round was supposed to go for 80 minutes, and we took it to time, but during the last few rounds I was able to win the game, so that was good. Here were our commanders for the event: 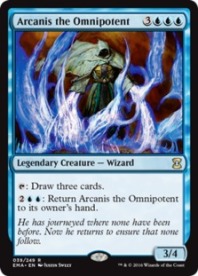 My roommate ran with Meren, I played Zur, and the other two were running Sen Triplets and Arcanis. I was impressed by the player who was using Arcanis, he managed to have great ramp, excellent card draw and did some tricky things during the round, including eliminating my roommate from the game. After that, I was able to eliminate him and then finish of the Sen Triplets player. It was a blast and I was glad that even though it took me a while to get going I was able to win this game with a life total of 64! It’s not even a lifegain deck but that’s just the way it worked out.

We played another round for fun, this time I played my Simic Merfolk deck and my roommate played this new Joira deck that technically isn’t even legal to play yet, as he had a couple proxies in it that are from the new Dominaria set that has yet to release. We allowed it anyway, and it turned out to be a pretty potent deck, though he was once again eliminated by the Arcanis player. We ended up scooping soon thereafter as the shopkeeper needed to close down for the day.

Overall it was a fun experience once again, though I’m not sure how many times we’ll be able to go over the course of the month. It seems like if you’re someone who can go every Friday and Sunday you’d have an unfair advantage over those who can only go a couple of times a month. I hope there is some sort of consolation prize, because otherwise it’s just throwing money away to play with randoms. I’ll report back with more details once I figure that bit out. Rumor has it that the member of our playgroup that moved away might come for a visit this month, so that would be a nice change of pace — playing at home with friends is always more fun.