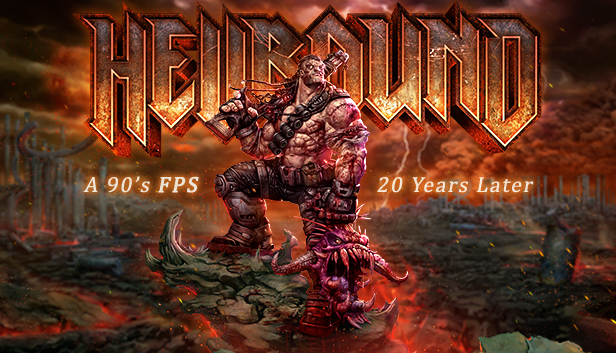 I ran across Hellbound: Survival Mode in my Steam Discovery Queue. It came out of left field, but its tagline “A 90’s FPS — 20 Years Later” caught my attention. Growing up in the 90’s, this immediately tries to tug at my heart strings so I dug a little bit deeper. The FPS genre is having something of a revolution as we speak, where familiar titles are being remade for a new generation (think DOOM or Wolfenstein) while other indie companies are trying to relive the glory days of the genre by creating new IPs that clearly pay homage to their roots. This game is still in development, but instead of the early access scheme that we’re all familiar with, the developers are allowing anyone to head to their website and sign up for this beta. I’m assuming that a full on campaign mode and possibly some multiplayer component will be added to the finished product, but for now you can check out this survival mode. It’s a nice change of pace as other developers have chosen to monetize things this early on. Other titles that are on the horizon that remind me of the “good ol’ days” are those like Amid Evil, though that one is charging for early access. Here’s the official trailer so you can have a look:

I did actually attempt to record myself playing a few rounds but for whatever reason I didn’t have OBS set up properly and I just haven’t gotten back around to trying it. Still, the trailer gives you an idea of what to expect. You’ll fight against endless hordes of enemies, earning new weapons as the rounds go on. I think my personal best was somewhere around the 13th round or so, but I’m sure as the game develops there will be more layers added and perhaps new modes. The gameplay is tight and responsive and that’s important in any FPS. The graphics are pretty and smooth, and the design of the weapons and enemies are par for the course. Hellbound clearly draws its inspiration from DOOM, and the design choices make that clear but this isn’t necessarily a bad thing. The tried and true is a good thing in this regard. I look forward to seeing how this game develops and will gladly throw some money at a fleshed out product. Just thought I’d throw this out there for those of you who might want to give it a whirl and maybe missed it among the thousands of titles that are available. As always, happy gaming!