It’s Dominaria Week, and that means a ton of new brews will be popping up online revolving around the new legendaries. I have several brews that I want to share, along with possibly an update across the board for other decks that got upgrades via the new set. With that said, I have a bunch of MTG related posts that you’ll see coming down the pipeline for the next week or so, and that probably means less gaming posts but posting something is better than posting nothing, right?

Having pre-ordered a box of Dominaria, I received the exclusive buy-a-box promo card, Firesong and Sunspeaker. I spoke about this card recently, but took the time over the weekend to find a build that feels pretty damn good for it, while remaining budget. The Boros color combination is joked about for being the weakest pairing in Magic, and this card doesn’t single-handedly fix that but the deck looks solid on paper. Will have to test it a bit to see how well it performs, but it appears serviceable. Here’s the commander in case you are unfamiliar:

Firesong and Sunspeaker are fairly straight forward. A 4/6 for 6 mana, that causes your red instants and sorceries to gain lifelink, and your white lifegain spells get an added burn component. Sounds simple enough, but it can get somewhat complicated. Let’s take a look some examples: 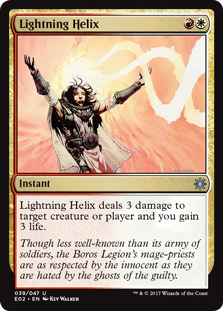 Anger of the Gods is a red sorcery that deals 3 damage to each creature. Because your red spells get lifelink with F&S on the battlefield, this means you gain 3 life for each creature the spell hits, included F&S (who will live through the damage). Ritual of Rejuvenation causes you to gain 4 life. If F&S is on the battlefield, you’ll then be able to deal 3 damage to target creature or player (you get to draw a card as well). This is the kind of card I’d never play, but a 3 mana gain 4 life deal 3 damage and draw a card spell sounds pretty nice! Things get more complicated when you play a multi-colored spell, like Lightning Helix. The spell itself deals 3 damage to target creature or player, and you gain life. This is both a red and a white spell, so the 3 damage you deal will also cause you to gain 3 life. Gaining 3 life will then allow you to cause 3 damage, but you’ll basically end up with multiple triggers off of a single card.

This deck wants to be a spellslinging deck despite being in colors that aren’t that great for it. As such, I’ve included quite a bit of “good stuff” — that is to say that it’s some of the better cards in the colors but not necessarily all on theme. The main goals are to build around dealing damage and gaining life, and there’s a number of win-cons that can be used in the process. Let’s just jump into some of the notable additions so you can see where I was going with the build. 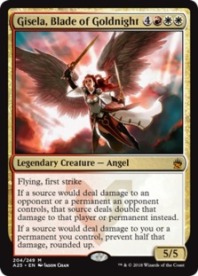 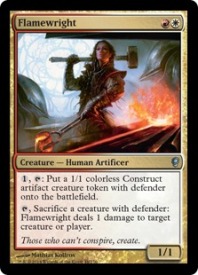 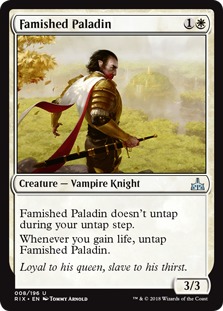 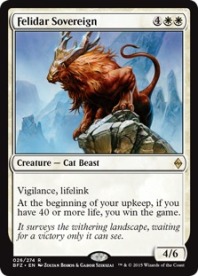 So we’re stealing some of Oloro’s tricks here, but theoretically you should be able to keep a fairly high life total throughout a game, and use that life total to win with cards like Felidar Sovereign. You can gain infinite life with the Famished Paladin/Resplendant Mentor combo, you can flatten someone with a super large Serra Avatar, and you can get some big mana to help with your X burn spells using Neheb. Balefire liege is a lord for white and red creatures but also has F&S’s passives on it as well. I’ve also included Young Pyromancer, Crested Sunmare, Flamewright and Blaze Commando for some token generation to help protect us (or potentially win with go-wide strategies). I’m sure it’s starting to come together for you by now, but let’s look at the supporting spells (besides the ones I showed you earlier). 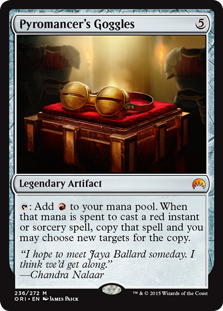 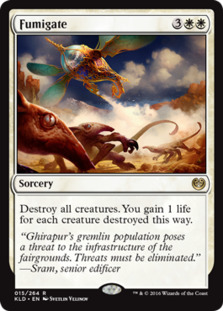 So I’ve tried to keep with the theme of the commander with our bevy of support. You’ll be destroying things and gaining life, or gaining life and doing more damage, or getting tokens off of triggers, etc. If you can get to 50+ life, you can win with Test of Endurance or use 50 life to blow someone up with the Aetherflux Reservoir. All of the big X spells or board wipes do damage or cause you to gain life, which in turn will do that some more. Blasphemous Act and Star of Extinction are particularly good, because they do large amounts of damage to targets, meaning you gain that same amount of life per target. Hit ten creatures with Star of Extinction, and you’re gaining 200 life. That’s just crazy.

Overall I don’t think this deck is going to be very competitive, but I think it will be fun to pilot. It’s under $150 total investment so not bad, but you’ll have a tough time getting the commander if you didn’t buy a box. Currently holding close to $20 value and that could potentially go up.

The official release date for the newest Magic: The Gathering set, Dominaria, isn’t until April 27th (this upcoming Friday) but because I pre-ordered a box of the set, I was able to pick it up this past weekend during the pre-release events. This isn’t the first time I’ve purchased a box, as when I was newly returning after a decade-plus break I picked up a box of Aether Revolt, which was the first set to release after coming back. In hindsight, Aether Revolt probably wasn’t the best set to buy a box of, mainly because it was before several changes took place. I should also notate that this box was a gift from my wonderful girlfriend who spoils the shit out of me. Thanks my love!

There are a few things that are different this time around. The standard rotation changed up a bit over the course of the last year, where the sets that are rotating out take longer to happen. Wizards also decided that instead of multiple split up sets during the course of the year (like the Kaladesh/Aether Revolt and Amonkhet/Hour of Devastation cycles) there will be larger sets a couple of times a year and the return of the Core Set. This means that Dominaria is a larger set than Aether Revolt was (269 cards as opposed to 184) and as a result the break down of cards that I received was more favorable. This was also the first time that you could pick up a pre-ordered box during the pre-release window, and getting cards early is always great (that’s the main reason why I usually go to the pre-release in the first place). A discount was given for pre-ordering a box this time around as well as the buy-a-box promo card being exclusive and unavailable in packs.

The card itself isn’t the most amazing thing in the world, but Wizards has been exploring different concepts lately, like adding keywords to spells. Giving your red damage dealing spells lifelink is an interesting idea, as is giving your white lifegain spells a small damage dealing component. Boros has been weak in EDH for a long time, and though I don’t think this magically makes things all better, it’s still a Boros commander I wouldn’t mind building and will likely do so. If nothing else it’s a cool card to have in the collection and I’m glad I got the box as I managed a bunch of great pulls! Since I broke down the box I purchased last time, I felt like I should do so again just to make some comparisons and sate my own curiosity. Here’s the numbers for Dominaria:

So comparing this box to Aether Revolt, we can draw a couple of conclusions. Both contained 540 cards but of those I ended up with different numbers. Tokens and Basic lands will be the same, though I ended up with 7 foils as opposed to 5 the last time. I also opened up more Mythic Rares this time, with a total of 5 instead of 3.  I guess the trade off there is that I ended up with less rares this time, 29 compared to 34. Overall though I feel like the value of this set is better than the last few, though I’m not speaking monetarily. From a gameplay perspective I jammed a bunch of great cards into existing decks, and have already brewed up two decks helmed by Dominaria commanders and still want to build Firesong and Sunspeaker as well. Speaking of money though, I earned back about half of the box price with one card and that turned out the be the most valuable card in the set. I’ve been really lucky when it comes to this stuff, and had a good feeling going into this deal. That’s not to say that I got every card that I wanted, there are still a handful I’ll have to buy singles of but I think I made back the cost of the box at least, and that doesn’t always happen (definitely didn’t happen with Aether Revolt!). Like I did the last time, I’ll just share my Mythic Rare pulls now, but I’ll have some more articles about the builds I’m making with the new cards soon enough. 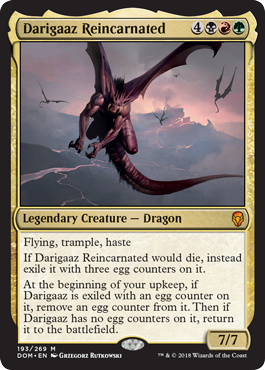 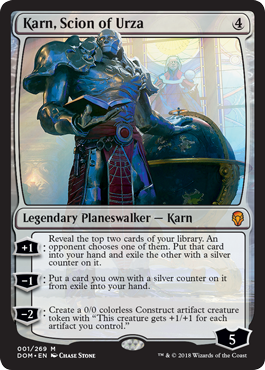 Of the Mythic Rares in the set, I got a few of the good ones. Jhoira is a pretty busted card, but my roommate has already built a deck around it and didn’t pull it during the pre-release so we’re going to be doing a trade. He did pull the Weatherlight as his Mythic Rare though, so we’re trading those straight across. History of Benalia is a card that spiked due to its viability in Standard, so it’s value is pretty good. I slammed it into a new brew. Karn, Scion of Urza was the most valuable card in the set and I found a place for him as well. Darigaaz is one that I’m not using and probably won’t. I could slam him into the Prossh deck I’m building due to being on color but it’s just an expensive card and not very synergistic. Lastly, Naru Meha is a new Wizard lord that I’m throwing into my Inalla build just because it has a nice ETB effect and will buff my other wizards so why not?

Overall I feel that this was a good buy. There are so many great cards in this set that buying a box is a sure bet and if you’re playing the paper game, you probably should get one while you can. They have amazing and busted uncommons in this set so the power level is absurd. I’d buy another box if I didn’t already have mostly everything I want. Highly recommended and worth every penny!