I’m not entirely sure where I first heard about Ironclad Tactics, but I remember someone talking about it and giving it praise. I happened to catch it in a flash sale on PSN for a couple of bucks, and picked it up as it ticks several boxes for me. It’s turn-based strategy, it has mechs, and it’s set in a historical period. It doesn’t really compare to most games, as it mixes a combination of TBS and CCGs, but the game I could compare it to most is one that I spoke about within the last few months: Has Been Heroes.

The only reason I can really compare the two games is that they both utilize “lanes,” in that whatever unit you put down will travel in a straight line and only perform other actions if something lies within that path. If they hit a wall they will stay put until you use a “maneuver” card to move them to another lane. So it’s a little more slow paced than Has Been Heroes, but still makes use of this mechanic.

Here’s the main game screen. It mixes this lane based mechanic with the use of cards. Turns are automatic, and occur in real-time using the little dial in the bottom left corner. You’ll have unit cards and action cards in a row, and each turn the right-most card will fall off and a new card will appear at the left. You’ll want to use the cards as efficiently as possible with your action points. You’ll only get one point a turn, unless something else in the level gives you extra (like capturing flags). Enemies will appear on the right side of the map while your units will progress to that side from the left. When they meet in the middle they fight. If a unit makes it all the way across the screen unimpeded, you’ll get a victory point (or two, depending on the unit). That’s what most levels are like. New units and actions are piled on as you progress, and though admittedly I haven’t played it that long, there’s still enough of an impression that has been left on me. It’s a good little time waster, but not something you’ll play for too long. There is a full campaign and some versus modes as well, but I imagine after completing the campaign most people would be done. 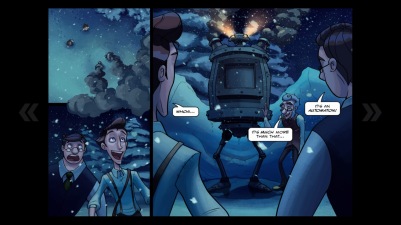 The storyline is told through beautifully rendered comic book panels. Apparently it’s the Civil war and parts of the country are seceding, while your characters work for a guy on the Union side. Someone has created these “Ironclad” mechs, and apparently the Confederacy has them too. So a bit of alternate history here, but it still feels believable enough. I’d urge you to give it a try if you enjoy tactical games, particularly if you can grab it for a couple of bucks like I did. It’s interesting if nothing else.