Battlebond releases this Friday, but this past weekend there was a “preview weekend” event at my LGS; my roommate and I took the opportunity to check out the new set early. Being a Two-Headed Giant format makes the sealed experience a bit different than what I’ve experienced in the past. Rather than getting a pre-release kit for $30 and building a deck from the packs included, then running through a few 1v1 rounds and possibly winning some extra packs, we were both awarded with 4 packs for $20 each. Technically that sounds like a sham, but the two of you build two decks from the pool, and in our case we just took pictures of the packs we opened so we could pull our cards back out after the event. Similar to pre-release events, you’ll run through rounds against rotating opponents, but 2v2 this time around. We also received promo cards at the beginning of the event, and I started the day off pretty good:

Off to a good start! #battlebond #mtg pic.twitter.com/hrezeMW3Mo

It seems that everyone got one of the new “partner with” pairs, my pull being one of the better options. This also helped steer us in a particular direction when it came to deck building. Unfortunately I didn’t end up with many other cards I wanted from the set, and none of the big money reprints or new additions. My roommate pulled a foil Greater Good, and the Najeela that I’d love to trade for but not much else. We ended up doing really well in the tournament though, and that made me proud. Our deck ended up centering around those two Planeswalkers above, along with a suite of removal in Black and Red, some good ramp in Green, and a splash of White. He ran RGW and I built UB. Though we were running the Kenriths and Najeela, we never played any of them. We primarily played Warriors though as we had good synergy in those colors, so I most slung the removal spells and he mostly made the creatures. We won the first two rounds, and only lost the third round due to a well timed Archon of Valor’s Reach, naming Sorcery. Our trump card ended up being Thrilling Encore, working exactly as planned in game 2, where we cast some removal spells, swung out with our board and killed/lost creatures, then played Encore to return all of the killed creatures to our side of the field. Game Over. 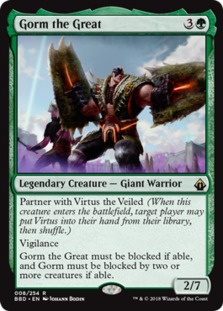 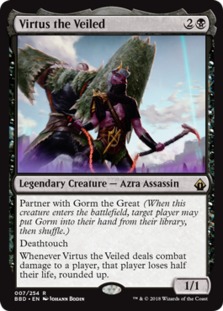 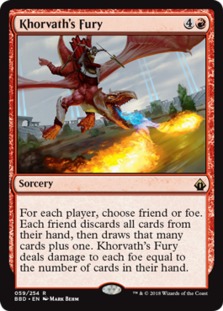 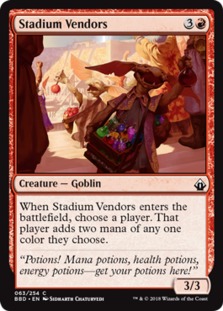 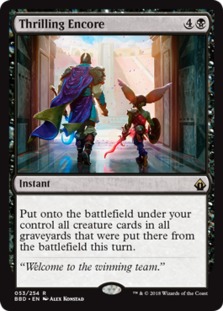 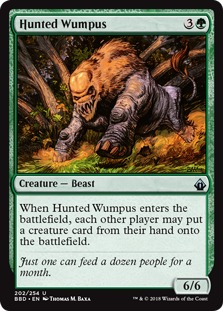 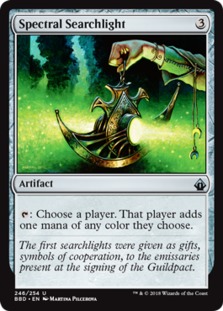 Besides the aforementioned Planeswalkers that I’m thinking of throwing into either a Superfriends deck or my Jodah deck, these were the cards I pulled that I can see places for in my existing EDH decks. In some cases I’m not too sure where they will end up but I’d like to use them nonetheless. The Blaring Captain/Recruiter pair are good in a Najeela deck, as is the Mindblade Render, and I’m considering where I might put them. Sylvia and Khorvath are screaming to go into Kaalia, considering I added a handful of dragons to that deck recently and they’d love to have doublestrike. Khorvath’s Fury is a nice wheel that I’m going to put into Locust God. The Goblins will find a place in Krenko. The Wumpus and Searchlight are great for my group hug deck, and Seer’s Lantern will work for Grenzo. That leaves Gorm and Virtus, which really want to be in some sort of unblockable type deck. Not sure where to use Spellseeker either, though I’m sure she could go into Kess or Taigam, something that wants to grab a particular spell. It’s a tutor at least, and that will find a home.

Overall I’m happy with the outcome of the event. I wish I would have pulled a Doubling Season or a Land Tax… hell I would have loved a Diabolic Intent, but I can still grab a few more packs after Friday and pick up some singles. I’m not missing out on a cheaper Doubling Season, I’ll guarantee that. I’m hoping that Wizards can keep this sort of thing going, I really liked playing 2v2. I’ll definitely participate in some more Battlebond action in a couple of weeks at GP Vegas!