It’s that time of year again, the big Steam Summer Sale is here, and that means discounts on a huge amount of games. Typically the summer sale comes with some sort of activity to distract you from the money you’ll be spending on a bunch of games. Each year it’s been a little different, though one of the best years was a couple back when there was a clicker game and it was actually fairly entertaining. This year is following that same sort of idea, with a new clicker game, a new badge to craft and of course the big discounts we have come to expect from the event.

Remember when I wrote about the Spring Cleaning Event a couple months back and we all received a mystery box? Well now we know what that was for. You’ll be playing as a “Salien” fighting against other aliens and guarding your base. You can customize you Salien and that mystery box contained various bits of clothing for your paper doll. A little underwhelming, but that’s what it is.

Aside from clicking to shoot your base’s turret, you also get some different abilities. You start with one, and it will help to keep you from getting overwhelmed. Apparently you gain experience for completing rounds on planets and as you level up you’ll open new abilities. I don’t think I’m going to put that much time into this, but I assume the more you play the more you can open up and perhaps there are more ways to gain trading cards. I know the discovery queue will give you 3 cards a day and then you get some for playing the event, but there could be other things I’ve missed so far. 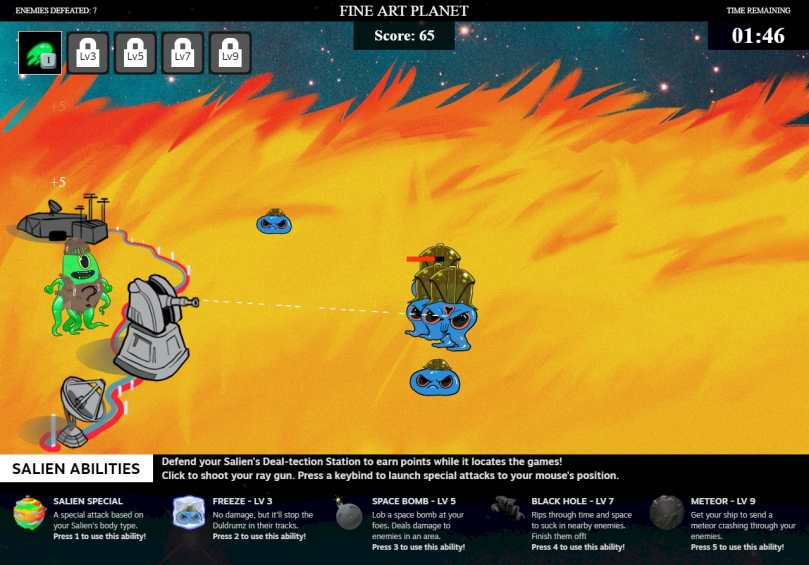 From that main map you’ll enter a planet and then choose a vacant square to do battle. You’ll fight aliens for a couple of minutes, earn xp and then move on. Apparently by completing squares you get entered to win games, but I’m not holding my breath when it comes to winning something (I have terrible luck). It’s probably best that you get in there and blast as many aliens as you can, then you might actually win something, but overall I’d say it’s probably just best to craft the badge (if you want it, I like collecting them) and get some sweet discounts on games. I know I dropped a couple bucks to pick up the Darkest Dungeon expansions, and Wolfenstein II is tempting me at $23. Otherwise, that’s pretty much all there is to it. It’s a nice little distraction and I always look forward to seeing what new things Valve comes up with for these events. Happy gaming all!

One thought on “Intergalactic Summer Sale”