The Commander 2018 product launches in just a few days (on August 10th) and though I’ve already talked about the spoilers and how much I wasn’t all that impressed, upon further review I have found some decks to build out of the precons anyway. My roommate and I were discussing the possibility of going in on the complete set of four decks together and then splitting that in half. While we were both initially most interested in the Lord Windgrace (Jund Lands-Matter) deck we ended up agreeing on how to split up the four pack — I would take Bant Enchantments and Esper Top-Deck while he takes the Izzet Artifacts and Jund Lands Matter decks. As such, I have started to thoroughly look at the deck lists and since I’ve had a little time off of work I was able to brew up something out of each of the precons. 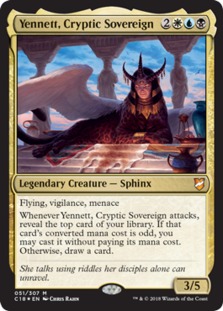 Today, we’re looking at the “Subjective Reality” deck lead by Aminatou. I really don’t care for this card, and though the backup commanders are intriguing, I already have a couple of Esper decks and don’t think I want another. I have a Scarab God Zombie deck and though adding white to it is intriguing, I don’t think Varina is more powerful than Scarab God. I brewed a Sphinx tribal deck in Azorius a while back and gave up on ever building it, adding black to that mix could be fun, but there really aren’t enough good Sphinxes to make that deck. In any case, Aminatou and Yennet both probably have decks that could be built around them but I’m not going to bother at this point. Like the rest of the precon decks, there are the three main generals that fall under whatever color combination, and then another legendary creature that is missing one of the colors, and in this case, that is the exact creature I want to build my deck around. In all honesty the precon isn’t adding much to the deck either, but my chosen commander has spiked so it makes more sense to buy the precon than just the single — at least I’ll get some lands and staples along the way, and I can see a case for using some of the pieces elsewhere. So before we get to the new brew, let’s look at our commander:

Ninjas are one of the under-represented tribes in Magic, like Pirates/Dinos before them. With Yuriko, there is finally a proper Legendary Ninja with which to lead a Ninja deck, however there aren’t that many Ninjas in the game. I have literally included all of the black and blue Ninjas that exist, and it’s not enough to really focus on the tribal theme. There is a solution to this though, and we’ll discuss shortly. What makes this commander exciting to me is that it uses the old Ninja-exclusive keyword “Ninjutsu” but adds a clause that it can also be done from the command zone! So each time an unblocked attacker gets to one of my opponents, for a blue and a black I can return that unblocked creature to my hand and then put Yuriko down tapped and attacking. Her additional ability triggers when Ninjas do damage to a player, which means she counts towards this as well. After the damage step, I’ll reveal the top card of my library and put it into my hand (so it’s card draw each time a Ninja does damage), then EACH opponent loses life equal to the revealed card’s CMC. That’s a very effective means of burning out the table, and means we want as many Ninjas in our deck as possible, along with plenty of evasion so that we can get in and draw cards while draining our opponent’s life. First, let’s look at the actual Ninja’s I’ve included: 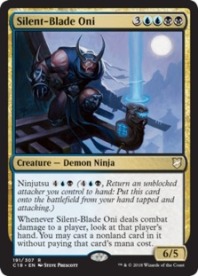 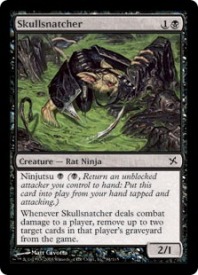 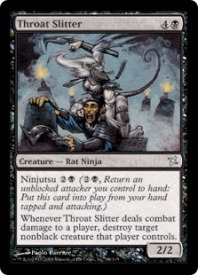 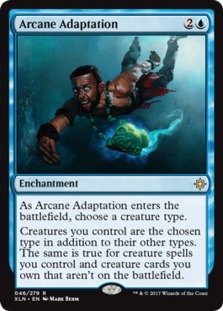 Generally speaking, the Ninjas we have here are pretty good. Most are a reasonable CMC while having ninjutsu. Some will help me to remove other creatures, some will cause opponents to discard, and one in particular can become a copy of something else while remaining a ninja. As you can see though, there are only 10 ninjas here, 11 if you count our commander. That’s not enough for a tribal deck, but our commander really wants you to do damage with Ninjas, so I’ve included three cards to help with this. Conspiracy, Xenograft and Arcane Adaption will make all of your creatures Ninjas, and that’s a lesson learned from my Reaper King deck that would not function without them, as most of the scarecrows out there were garbage. There aren’t ways to tutor enchantments in dimir colors outside of the normal expensive black tutors, so we’re hoping for one in our opening hand or while drawing cards through the game. Not only do we want all of our creatures to be Ninjas, but we also need to get some sort of evasion so we can do the combat damage to opponents and bring more Ninjas in with ninjutsu, or just so we can trigger Yuriko’s ability, so let’s look at how we can do just that. 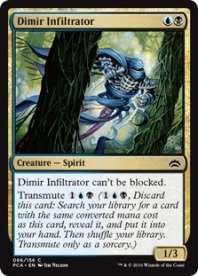 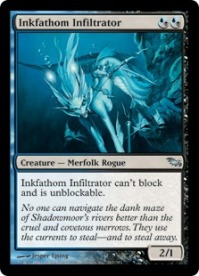 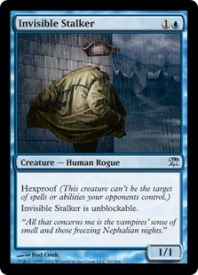 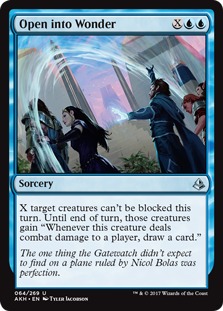 I’ve added some relevant non-Ninja creatures to the pool, some of which have baked-in evasion such as being unblockable. These will still count as Ninjas if you have one of the aforementioned enchantments out on the board, or alternatively you can use ninjutsu to swap out the unblocked attacker for a real Ninja if you don’t have the enchantment available. I’ve also included Keeper of Keys and Tetsuko to give more unblockability to your creatures. Open into Wonder can help you get through with multiple creatures and will draw you some cards in the process, and if all else fails there’s good ol’ Rogue’s Passage. Because we don’t have that many Ninjas (and we really want the real ones to use their Ninjutsu abilities) we’ll also want a decent recursion package. Here’s that: 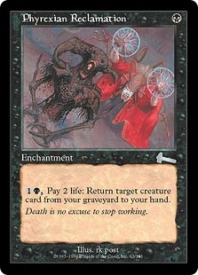 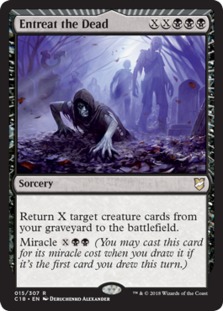 Oversold Cemetary, Palace Siege (naming Khans) and Phyrexian Reclamation are going to be our best ways to recur creatures over an over again. The first two will just give you a creature from graveyard to hand, while the latter costs a couple mana and life to recur but can be done multiple times in a turn. If you have the mana, Entreat the Dead (particularly for it’s miracle cost) will net you several creatures at once. Ditto that for Patriarch’s Bidding, though that one will be more viable with one of our creature type changing enchantments on the board. The Eldest Reborn fits into multiple themes in this deck, but will force some sacrificing from you opponents and can also get you back a creature or allow you to steal one of theirs. The other two cards, Stitch Together and Mortuary Mire don’t do as much but will work in a pinch. The latter also helps with top deck manipulation, as you can put a high CMC creature on top of your library to set up Yuriko’s trigger for maximum damage. Let’s look at the other ways we can manipulate the top of our library to our advantage: 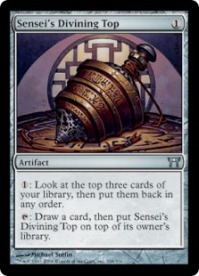 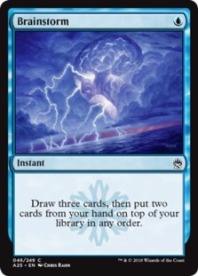 Sensei’s Divining Top is the penultimate card for doing these sorts of shenanigans. It allows you to brainstorm for a colorless mana at any point in time. Otherwise, there are poor man versions in Crystal Ball and Seer’s Lantern. In spell form, we can Brainstorm, Ponder, Portent and Dream Cache. Viscera Seer can let us Scry for sacrificing a creature, and in the right circumstances we’ll want to do so (Having an Oversold Cemetary that will bring the creature back, or having Grave Pact out will give you some benefits from your own sacrifice). There are also a couple of scry lands included that can help in a pinch. We want to mess with our top deck to give Yuriko triggers that much more effect, but also so we can draw into the cards we want. That brings me to our subtheme (besides top deck manipulation). 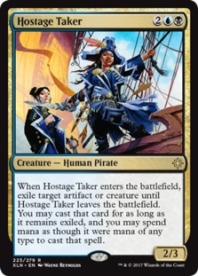 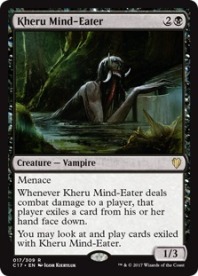 Dimir is exceptional at a few things. One is theft. Another is Mill. I’m not going to make another mill build since I did that with Tetsuko, so instead I’m going with forced sacrifice since we have a good amount of recursion and can use these tools again and again. So above we have Evil Twin, which isn’t direct theft, but allows you to copy a troublesome creature and then destroy it with its ability. Hostage Taker, Kheru Mind-Eater and Gonti exile opponent’s cards and let you cast them. And then there’s the big three creatures that we want in a sacrifice/recursion environment: Fleshbag Marauder, Merciless Executioner, and Shriekmaw. They can force your opponents to sacrifice a creature, while you’ll just sacrifice it. Shriekmaw is usually just used for its evoke cost and then it’s sacrificed anyway. Bonus, if you have Grave Pact on the board, each time one of your creatures die opponents have to sacrifice another one, so in many cases these are two for one creatures! Keep the board wiped and you won’t need evasion to get your Yuriko triggers! 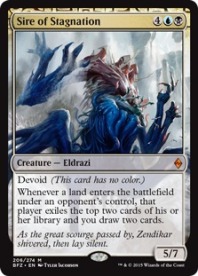 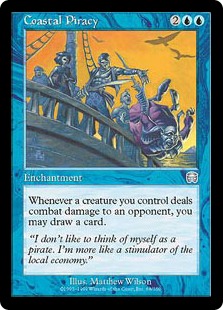 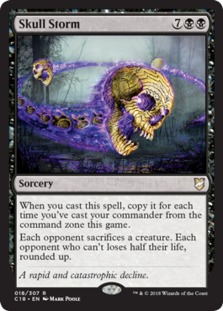 Lastly, let’s look at some of the final cards of the deck, ones that don’t really fit into the other categories. I included Rona because she can do some interesting top deck stuff. You can pay 4 and tap her to exile the top card of your library and you may cast cards that she’s exiled. This means you can manipulate the top of your deck and then do so to get basically another hand of cards you can play at will. Also, when she ETBs she can exile an historic card from your graveyard for you to cast again. My favorite target here would be the lone saga: The Eldest Reborn. Also included are cards like Duskmantle Seer, Sire of Stagnation, Mulldrifter and Coastal Piracy for more card draw. Sower of Discord is an awesome demon that will cause an extra opponent to take damage off of damaging another, and Skull Storm is a finisher in this deck, particularly if you get the storm count up there.

That’s all for this brew, but I’m actually rather excited about getting to it! You can see the full decklist here. Which commander did you choose to build around in this deck?