Guilds of Ravnica is the next major set to release for Magic: The Gathering, coming early next month on October 5th. Some things have changed with this new set, and as usual I like to cover the spoilers while spoiler season is still hot. However, because of the breadth of things I have to talk about, I’m going to save my thoughts on spoilers from the core of the set for after the full spoilers are released. Today, I want to talk about some of the supplemental products that are releasing around this set, because there are some things of interest that I rather like and some stuff that I don’t. This block (this set, and the two coming next year) is set in the plane of Ravnica, which is host to a city of guilds (comprised of our ten two-color pairings). This is the third visit to the plane, the first being back in 2005 when I wasn’t playing the game, with Ravnica: City of Guilds, and Return to Ravnica that released in 2012, also during the time that I wasn’t playing. 6 years later, here we are again.

As has become the norm as of Dominaria’s release there is once again an exclusive buy-a-box promo card. My girlfriend gifted me a box of Dominaria so I have a copy of Firesong & Sunspeaker which was a cool card if not a little underpowered. The promo card for Core Set 2019 ended up being a better card, though Nexus of Fate is very similar to cards that already exist (I didn’t want to buy a box of this either). #MTGGRN has another middle of the pack card that is interesting, but probably only usable in Commander. I could see this card ending up in my Yisan, The Wanderer Bard Deck:

A card with ten CMC and three pips is hard to include in a deck even in the Commander format, but one of the featured mechanics (which happens to be a returning mechanic) makes this more intriguing. The Convoke keyword allows you to tap creatures to help pay for the mana cost, so in creature heavy decks, or those with token strategies should be able to reliably cast this in mid-to-late game scenarios for just the three green mana. Better still would be to cheat it into play without having to rely on Convoke, but either way a 16/16 Indestructible is pretty good. I think for ten mana it should have Trample as well, but green has plenty of Trample enablers, so by the time you’re ready to cast you should have something available to help you out. 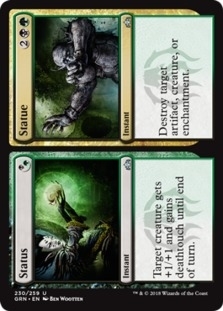 Speaking of mechanics, there are some new and some old coming with the new set. Convoke being one of the returning mechanics that we just covered, Mentor is the other that we’ve seen before. It’s rules text are as follows: whenever this creature attacks, put a +1/+1 counter on target attacking creature with lesser power. It’s less interesting in Commander, but in Standard I’d think it will work well. The new mechanics introduced with this set are Surveil, Jump-Start, and Undergrowth. Graveyard synergies are getting a boost in all formats here. Surveil is essentially another Scry ability, but instead of top or bottom of your library, it’s top or in the graveyard. Undergrowth has different effects but relies on creatures in your graveyard to solve for X, and as such will work well with Surveil filling your graveyard. Jump-Start has a pretty shitty name, but is essentially Flashback but with the added cost of discarding a card on top of paying the mana. It’s an alright thing we’ve kind of seen before. Split cards are also returning (as pictured above) and these tend to be so-so in most cases. This example is most likely great in Standard but not something I would use in Commander. With split cards you can pay the mana cost for either the left (bottom) side of the card and only get the one effect, or pay both mana costs and cast both spells at the same time. It’s not as good as the Amonkhet splits, but it’s something most players should already be accustomed to. 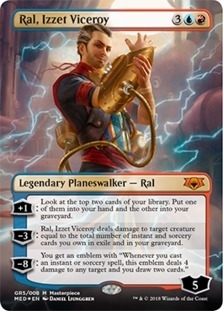 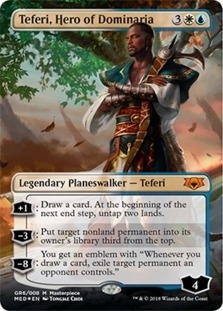 In a controversial move, Wizards (or their overlords Hasbro more like) have made a product called “Guilds of Ravnica Mythic Edition.” It’s unclear at this point if this is a product that will only be available in this box set that is priced at $249.99 and contains 8 alternate art Planeswalkers (pictured above) and 16 booster packs of the set, or if the “Masterpiece” versions of these Planeswalkers will be available in packs as well. This is also something that is unavailable from your LGS or Wizards themselves, and is only being sold from Hasbro directly. To put things into perspective, packs are typically sold at $4.99 each, so 16 should = ~$79.84 + tax. This is almost $200 more dollars for 8 foils, or $25 each. That’s a bit much. I’m hoping that they’ll end up in packs because I would love a copy of Liliana for my Zombie deck, but I already own Elspeth and Teferi, sold off my Daretti, and don’t really want the others aside from maybe the Nicol Bolas. So yeah, not something I’ll be purchasing, but if the individuals are sold as singles or I’m lucky enough to rip a pack containing one I’d be okay with that.

Another interesting product idea are “Theme Boosters” that are packed with only cards in the colors you want. This first set is concentrating on five of the ten guilds of Ravnica: Dimir, Izzet, Golgari, Boros, and Selesnya. So when you pick up a theme booster, you can pick one of these guilds and only get cards of that guild’s colors, making it easy to boost the power of a particular deck you’ve built. Of course you’ll probably want to mix and match, since you’ll probably build more than one deck around these guilds (or might already have Commander decks in their colors like me) and will want a little bit of everything. I still think it’s cool that they’re doing this because sometimes there are colors that are doing things you just don’t care about and you can skip them altogether. It’s unclear if these are the only way you’ll be able to get them, but they’ve also given us some new lands to pimp things out again. 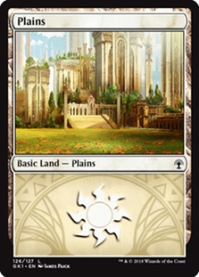 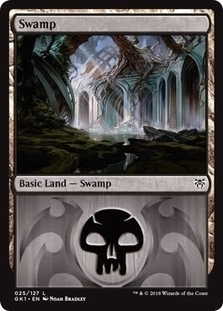 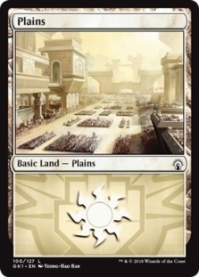 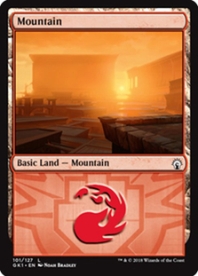 Instead of full-art lands like Amonkhet, Zendikar or Unstable, this time we’ve gotten some basic lands that have some accentuating artwork in the text box with the corresponding guild’s symbols. I think these are great and will definitely be using these to pimp out some budget decks that fall into the colors (my Dimir Ninjas and Boros Firesong & Sunspeaker decks come to mind). Unstable lands are on the expensive side, and while Amonkhet and Zendikar full-arts are still affordable, these feel good as budget deck additions.

That’s all for this go-round. Full spoilers should be out soon and I’ll be back with thoughts on the rest of the set when that happens.