I was late to the party with the original Destiny, and I guess you can say the same is true with its sequel. When the first one released I was slightly interested but didn’t get around to purchasing it until after The Taken King came out. I didn’t play much then either, only checked it out for a little while but had a sour experience with a so-called friend and that turned me off from the game for a while. I ended up going back to it and running through all of the main story and side quests through The Taken King, and even purchased the next expansion but didn’t put much time into it after that. I had the intentions of picking up Destiny 2 at release just so I could hit the ground running and play the game while it was still the new hotness. But then when Destiny 2 released, it was pretty universally panned by critics and people whose opinions I trust, so I didn’t bother. Well, at this point the game has just released it’s first major expansion, Forsaken, and Sony decided to give it out for free as part of the Playstation Plus program.

RE: A conversation had earlier, Destiny 2 is actually available for download now per this announcement: https://t.co/g2cmaVTe5A The rest of the Plus freebies will be available on Tuesday like usual. I’m downloading it now, might as well see what the fuss is about.

Not one to look a gift horse in the mouth, I downloaded the game right when I found out it was available early. I convinced my best friend that he should download it as well, and we have been able to get in a couple of sessions together. 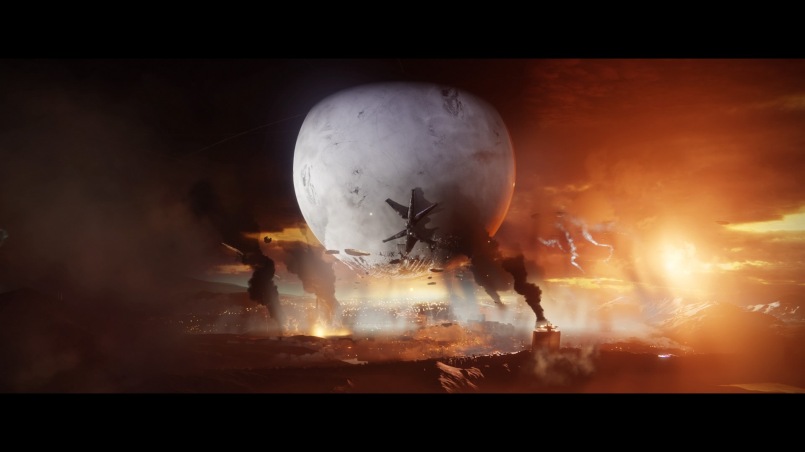 I’m not really remembering all of the issues people had with the game upon its release, as that was a year ago and my memory isn’t what it used to be. Still, having played it myself now I don’t really see much of a difference between this game and the first. There was a little snippet at the beginning when I logged in where my Destiny save game was imported into this game and I got to see the things I accomplished in the first iteration. The two characters that I had played were still there too, one being the Warlock I started with and the Hunter I ended up running through the game to max level. The storyline is a little convoluted but essentially a big alien threat has attacked The Traveler and essentially robs all guardians of their light. 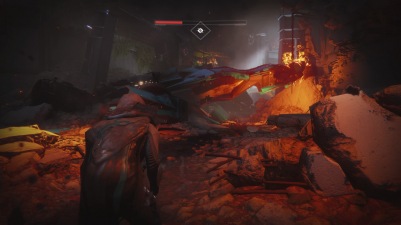 Despite the fact that my friend and I were in voice chat together, we had to play through these first bits of the story alone. We have the big attack and you’re pretty fucked up, you come too and wander about for a bit, then we’re treated to some cut scenes of the storyline and then eventually you wind up in a place called “The Farm” which is shown on the map as a separate place from Earth, but still looks very much like Earth when you are there. Whatever the case, it’s the new Tower, and you get your social interaction here along with some vendors, your bank, mailboxes and the Crucible guy. 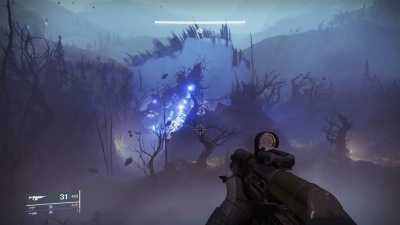 The main story pushed us to head to where a bit of The Traveler had broken off and landed near by. We’re warned that it’s a place of death, but after killing off some bad guys, we get our light back and can move on to bigger and better things.

Graphically it’s still a beautiful title. I really thought Destiny was up there with games like Uncharted that can really push this system to its limits. It’s surprising that a game can look this good on a stock PS4, considering most games are a bit more washed out. I assume on a PS4 Pro or on PC it looks even better, but it was free here, so this is where I’m going to play it. 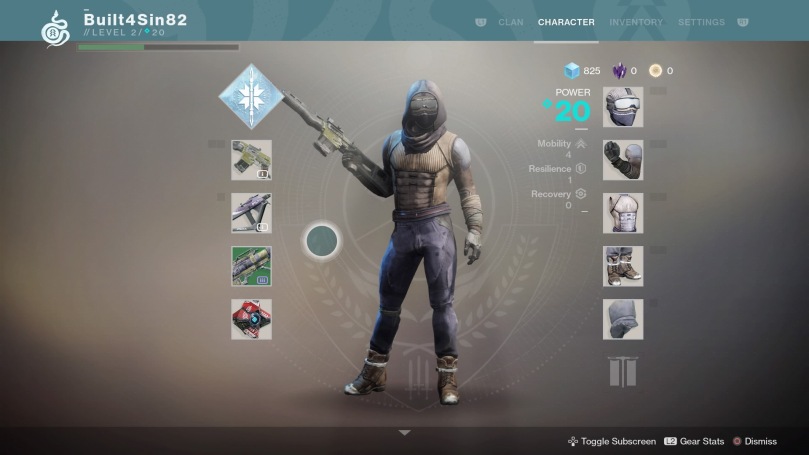 By the end of our first session I was level 3, as we took a couple hours to get to the point where we could even play together, and by that time it was getting late so we called it a day. We got together to play again last night, and ended up pushing further into the story. 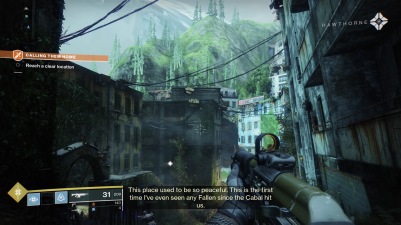 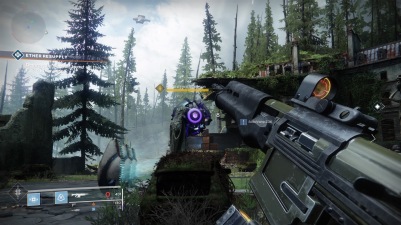 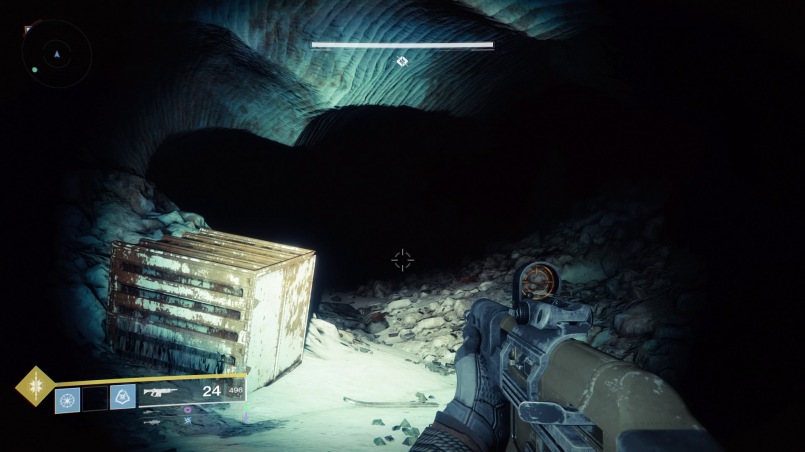 More fighting on Earth as my Hunter and my friend’s Titan leveled up and went on Adventures, participated in public quests and followed the story to it’s end here. Clearly there will be more to do on Earth at a later time, but for now they’ve sent us to Titan to help out with some network building.

We also see Cayde being held captive by our antagonist, and because I’m not blind or deaf I have already heard the spoilers about his demise and the plot of Forsaken having to do with getting revenge for him. But since I don’t know the particulars, I’ll play my way through and see for myself. If this ends up sticking like I think it will (we’ve been having a blast so far) I will likely pick up Forsaken once we’ve completed the main story.

When I was playing the original Destiny, I never did end up playing any of the game’s PvP mode, Crucible. I decided that I wanted to try it out. That was probably a bad idea. I assumed that as you entered into matchmaking, you would be paired up with and against other players of similar level/power. That doesn’t seem to be the case, as one guy was level 20 and the other 50 (?) I think. Either way they were much better equipped and felt way to hard to kill. We did get kills nonetheless, but lost the match and decided that we should level up a bit before bothering with that again. It does feel pretty good as shooters go but I didn’t like the level disparity.

By the end of our second session I was level 7 and had looted my first exotic from a quest. Nothing too special but I’ve found my groove. I don’t really like the new subclass that you’re stuck with at the beginning, and look forward to opening up others. I’ve found that while playing in a duo, I can experiment with my weapon loadout more though, and have settled on a Scout Rifle as my primary and a pistol for the side arm. I do like me some auto/pulse rifles and sub machine guns too, but for now these have worked as my friend’s titan is typically using a shotgun so he heads in first and I take out the long range targets. Overall it’s been a blast and I look forward to progressing through it!