Every few months a new main expansion for Magic: The Gathering releases, and we’re fast approaching the time when the next set comes out. Ravnica Allegiance releases on January 25, 2019, and spoilers have already begun. I’m still trying to acquire the cards I want from Ultimate Masters, and now there’s more good stuff coming down the pipeline. Such is the life of a Magic Player, I suppose. Like Guilds of Ravnica before it, Ravnica Allegiance takes place on the same plane, and with GRN covering five of the ten guilds on the plane, this new set with cover the other five. My favorite guild is present this time around, but I do enjoy three of the five very much. Regardless of my personal bias, there are some great cards coming out, new mechanics to explore and more stuff to collect! We haven’t seen too many spoilers just yet, but as I am excited to talk about what we have seen, I thought I’d get in a post today to do so. 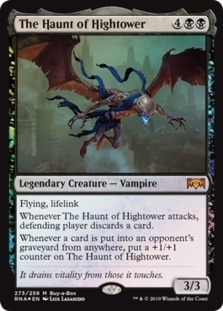 The tradition of the Buy-A-Box promo is still alive and kicking, and this time around there’s a pretty decent card being released. Unlike the Wurm from GRN, this Vampire is actually pretty sweet. A steep 6 CMC is the main limiting factor, but for EDH players like myself this should slot right into Edgar Markov decks. As I said, it’s 6 CMC but you get a 3/3 flier with lifelink which isn’t bad. He also causes people to discard when he attacks, so he’s also perfect for mill themed decks. What’s really great about him though, is that he gets +1/+1 counters each time any opponent puts a card into their graveyard from anywhere. This is huge, because not only will he turn into a 4/4 the first time he attacks, he’ll also get bigger each time you opponents cast spells or their creatures die. In a dedicated mill deck this guy is probably your go-to finisher, but even in a Vampire tribal deck he should be able to shine. I like it, but buying a box of this set probably isn’t in the budget so I don’t see myself getting him unless buying a single is reasonably priced. 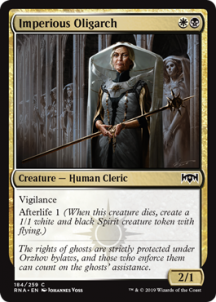 Orzhov’s new mechanic fits in with the flavor of the guild, as they have sported plenty of spirits over the years. Afterlife is the keyword, and it will have a numerical value after it. In this example, the Impervious Oligarch has Afterlife 1, so this means when it dies you get a 1/1 spirit with flying. Other cards in the set will likely have higher numbers, so there might be a way to flood your board with spirits if someone casts a board wipe. We’re also getting a reprint of Mortify with is a great removal spell in the colors, and Tithe Taker is already one of my favorite cards in the set, taxing our opponents for casting spells or activating abilities on our turn. 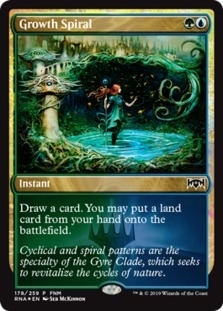 Zegana is probably my other favorite card that has been spoiled so far. The new Simic keyword is called Adapt, and also comes with a numerical value attached to it. You’ll have to pay a mana fee to use Adapt, but when you do you get +1/+1 counters on your creature. Zegana is already a 4/4 for 4 CMC which is great, but also has a card draw ETB provided you have another creature on the board. An added bonus is that all of your creatures with +1/+1 counters on them get trample, and my merfolk deck already has a ton of +1/+1 synergy. Instant add. I highlighted Growth Spiral as well due to it being a nice ramp spell that replaces itself for a cheap CMC, but also because I like these promo card’s artwork. 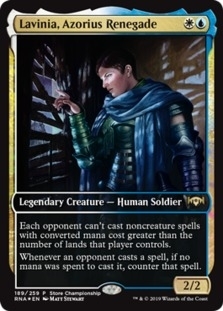 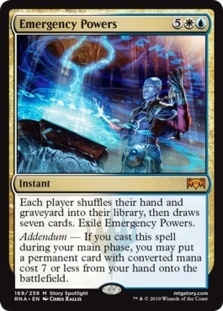 The Azorius leader of old, Lavinia is making her return as a stax-y 2/2 for 2 CMC. But she also basically shuts off mana rocks, as people can only play spells that they can tap lands to cast. She also shuts down cards like Force of Will or Pact of Negation, as if anything is cast without using mana to do so it gets countered. She’s going to make her way into my stax deck for sure. The guild’s new keyword is Addendum, and it basically adds additional effects to any card if it was cast during your main phase. It forces you to use instants when you normally wouldn’t if you want the additional effect, but seems to be worthwhile in some cases. 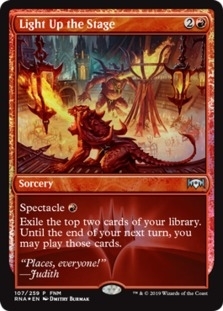 I’m not a fan of Rakdos, as their mechanics tend to feel detrimental more than helpful. Their new keyword is Spectacle, and it is an alternate cost that can be paid if an opponent lost life this turn. This basically forces you to play burn spells or to wait to cast things until your 2nd main phase, which usually feels counter intuitive. Whatever the case, it’s what they have to work with. They did however get a great new removal spell that can also target Planeswalkers and there aren’t too many of those in the game so it’s worth playing.

Gruul is the other guild I’m not overly fond of. I do think their new mechanic is pretty good however. Riot is the keyword, and it allows you to chose to either give the creature a +1/+1 counter or haste, and haste is a very powerful tool. The Spellbreaker is a great card in general, as it gives you (the player) and itself hexproof on your turn. The other creature highlighted here isn’t all that great, but a decent limited card. 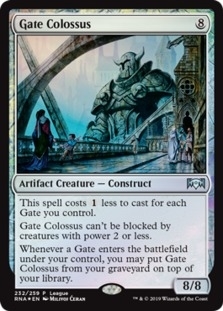 We’ve only seen one colorless/artifact card so far, and it’s an interesting one. An 8/8 for 8 that has some built in recursion along with cost reduction if you happen to be playing a bunch of gates. The Guildgates are dual lands that come into play tapped and really are rather shitty and slow, but with this set and the last it seems that Wizards is trying to make them a thing. I wouldn’t go building a gates-matter deck, but it seems they are trying to make that an option if you wanted to go that way. Most likely a Standard/Limited finisher and not really viable for more competitive formats.

So there you have it. Five guilds with five new mechanics. I like some of what I’m seeing here, and I’m sure we’ll be seeing more in the weeks to come. I’ll try to come back around to this after the complete spoilers are released. What do you think of the new set so far?

One thought on “TWR: Looking Forward to Ravnica Allegiance”