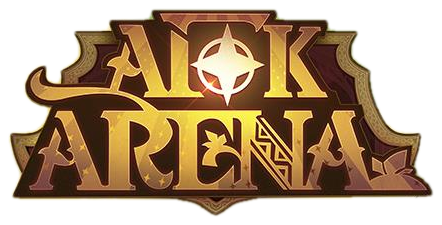 It’s been a while since I tried out a new mobile game, and this one happened to pop up in an ad while using another app — it managed to catch my attention. I’m not sure if it was the art direction or what that first caught my eye, but I decided to follow the ad to the store page for AFK Arena and ended up liking what I saw enough to go ahead and download it. I’ve been playing it for a couple of weeks now and I’m happy to report that it’s a nice time waster if you don’t mind “games” that don’t require a ton of input from you. Sure, there are quests and activities that require some clicks and/or setting up, but for the most part the game is pretty automated, and yet still remains interesting. 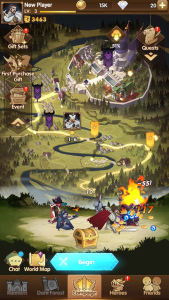 The majority of the time you’ll be looking at this screen, or similar ones in the sub-menus. The campaign map is a long winding adventure and really the only portion of the game where you really need to do things. Once beginning a campaign level, your characters will appear on the left side of the screen, and enemies on the right. Combat is AI controlled, so all you’ll really do is watch the combat unfold, and RNG + character stats will determine the rest. You’ll get gear and new skills for your characters as you level them up, but they will still use these abilities on cooldown and you don’t have input otherwise. The only part you’ll take in battles is using your character’s ultimate abilities, which charge up over the course of a fight and are clickable once that meter is full. Each character has a unique ability, and sometimes it’s best to hold off on using one that is available only because mistimed abilities can whiff. However, you can still set these abilities to automatic, and in that case you really don’t do anything but watch your minions do battle for you. 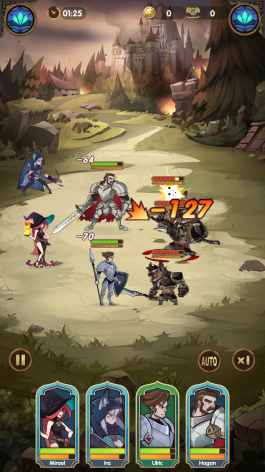 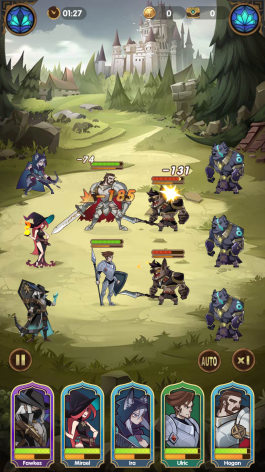 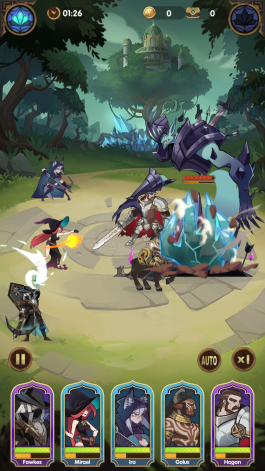 Combat isn’t necessarily bad to watch either, as I’ve fought my way through to the campaign’s third chapter and it hasn’t gotten too stale yet. You do open up new characters quite often, so you can choose to switch things up as you go along. Characters also come in a variety of rarities as well, so you may end up with a better version of the same hero and want to use it instead. You will have to level up the characters you want to have on your team though, and each has an alignment that affects combat but doesn’t seem to matter in these early stages. As such, you’ll spend your exp and gold on these upgrades, and as you battle through the game you’ll get gear upgrades that help as well. 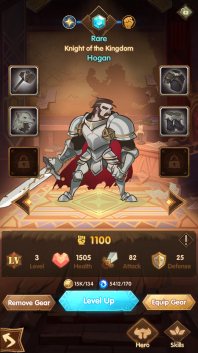 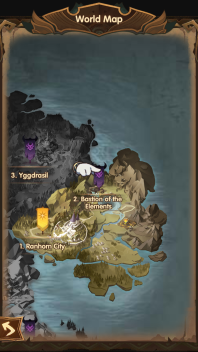 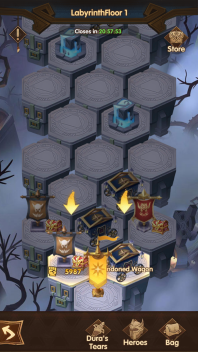 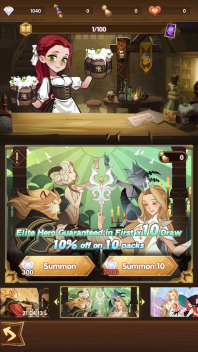 The world map appears to be rather large, so there is plenty of campaign to work through. Other activities include the King’s Tower and the Labyrinth, both of which are survival modes on increasingly difficult levels done in different ways. The Tower presents you with enemies, and you do your best to clear them to go the next level — pretty straight forward. The Labyrinth is a little different (pictured above) in that you can choose from two paths each stage, and there are special tiles where you can recruit powerful mercenaries, heal your squad, or revive fallen comrades. Neither are overly difficult, but it should be noted that the Labyrinth resets each day so your progress will be lost each time. There are guilds, and with that come guild hunts, where you fight an enemy continuously, but it slowly levels up and eventually you die. Points are recorded and the guild is rewarded after a set period. There’s also a store of course, and you can buy various heroes and things but I don’t see the point. You get gems at a rapid clip, so I don’t see the need to spend real coin. You’re also rewarded with summoning scrolls that sometimes give you some decent heroes, so I’d just play this for free were I you.

Overall I’ve enjoyed my time with it, and this is such a low maintenance title that it doesn’t feel overwhelming along with the other mobile games I’m still playing. I’ll have more updates on my progress in those games soon enough. Until then.