There was a “Retro Sale” on PSN the other day and a few titles caught my eye. There has been a nice trend of old school games getting repackaged into collections and ported to the Playstation and though we’ve seen this before, it’s become more prominent. Not only are we getting some awesome retro games you can’t get elsewhere (unless you own the original consoles and cartridges, which most of us do not [hence the retro console emulation boom]), we’re also getting retro games redone with modern graphics and I couldn’t be happier with some of these products. Not only have I picked up the NES and SNES minis, I have a retro Genesis console, a Genesis collection, I picked up Shadow of the Colossus, the Crash Trilogy and CTR, even the new Resident Evil 2 redo. One that is on my list to pick up is the remake of the Spryo Trilogy, and though it was on sale too I didn’t want to spend too much all at once. There were a few other collections of old arcade style games that I was interested in as well, but I try to limit my spending on games particularly when I’m already working my way through multiple titles. As such, I settled on the recently released Castlevania Anniversary Collection, and the upgraded Dragon’s Crown Pro. 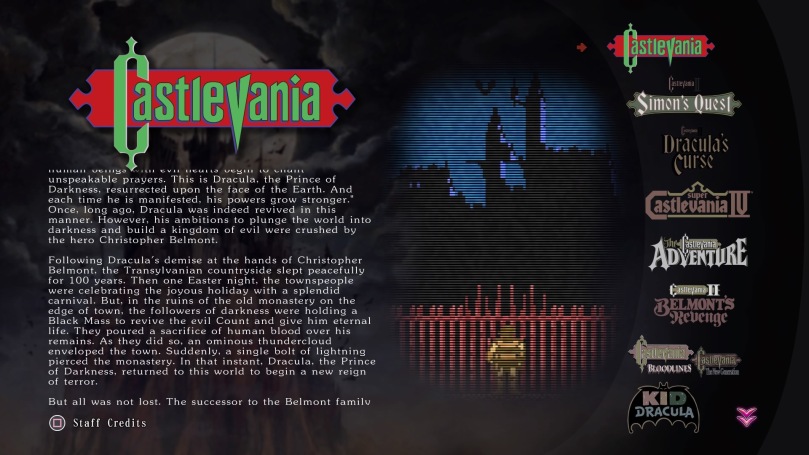 The menu is slick, and the collection boasts eight full games. The original trilogy from the NES, Super Castlevania IV from the SNES, two Gameboy titles, the Genesis version, and the never before released in the US Kid Dracula. The games are pixel perfect, meaning they won’t fill up the entire screen and are displayed in 480p. The games run fine, but do have the same sort of clipping and hitching present in the original cartridges. 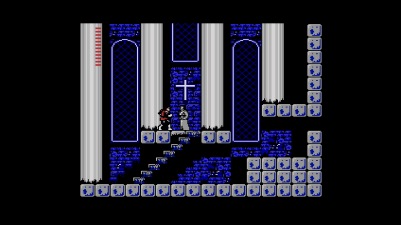 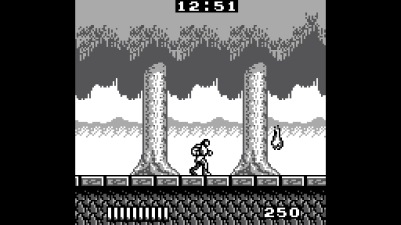 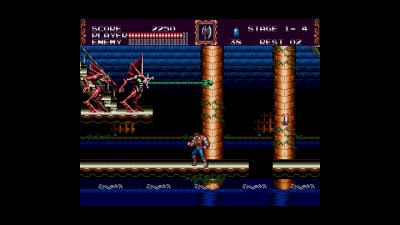 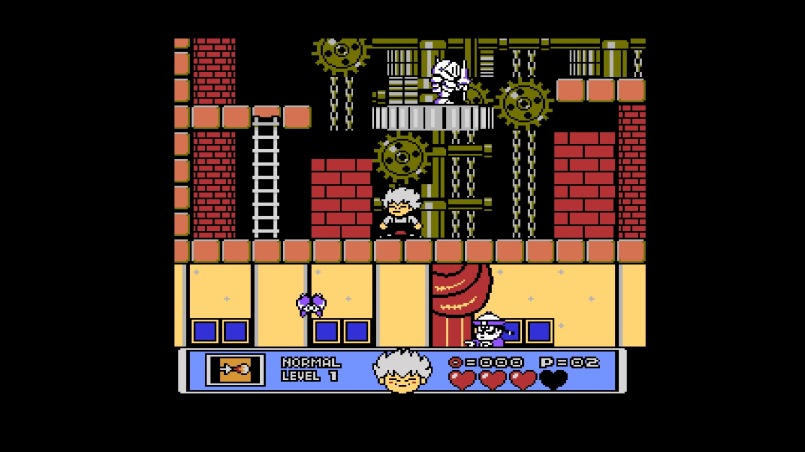 There are definitely some memorable moments here, the church with the creepy looking priest has been etched into my mind from my youth. I love the quote above, there’s actually a Black Dahlia Murder song by the same name. Castlevania is a typical platforming game, but Simon’s Quest was truly epic and was one of the first games I played with RPG elements. The third title introduced branching storylines and additional playable characters, and this feels like it was before its time. The SNES and Genesis games are better performing and slightly better looking, but overall follow the same formula. I couldn’t get into the gameboy versions… they are just terrible to look at and not satisfying to play. Kid Dracula seems fine as platformers go, but I actually like the more adult oriented games in the series, and this one is a little too cute for my liking, but overall they are cool games that everyone should at least check out if nothing else.

The collection also has a bonus digital book that is actually really cool. It tells the developer’s stories, the game’s stories and even has artwork and compares and contrasts the Japanese and US versions. I spent some time pouring through this and I think it was a nice touch.

The other game I picked up is Dragon’s Crown Pro. I played the original Dragon’s Crown on PS3 a few years back, and I remember hearing about the game being ported to the PS4 but when it launched they were still asking $40 for it which I felt was a bit much. I paid full price for the original but it was a new game and something that appealed to me so it was a no-brainer. In this case I wanted to wait for a sale, because though the game has been made to support up to 4k resolutions, I don’t have a capable TV so the only real upgrade here is that the full soundtrack was redone by an orchestra. It does seem to run smoother too, I’d attribute that to the better hardware. Either way it’s still the same game, but it was an awesome game and I’ve been having a blast playing it again. Both versions have the same trophy set, and upon inspection it turns out that the last time I earned a trophy on the PS3 was back in 2013, so it’s definitely been long enough that I don’t really remember the storyline.

Playing again has been refreshing. I remember there being some updates that occurred with the game that sounded interesting but I never went back and played it after beating it a single time through. The character I played on the PS3 was the Dwarf, so this time around I created a Fighter and have started over. It does support save game importing, but for whatever reason it was saying that it couldn’t find my save data from the PS3, so I would have had to track that down and it wasn’t worth the effort to me. I’m okay with playing the whole game through again anyway. Dragon’s Crown is essentially Golden Axe meets Diablo. It’s a side-scrolling 2D fantasy brawler that you’ll be familiar with if you ever played Golden Axe, Streets of Rage, TMNT, X-Men or countless other Arcade and Console titles. What keeps things interesting here is the fact that there is a town that serves as a central hub where you can buy and sell goods, pick up quests, modify your party of AI characters and other various activities. You’ll also get gear as you play, level up and spend skill points to customize your character. You’ll always only have one character to play, but you’ll change out the AI quite regularly, or you can go online and play with friends or strangers. 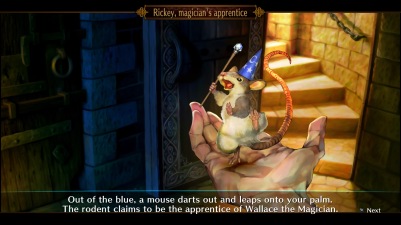 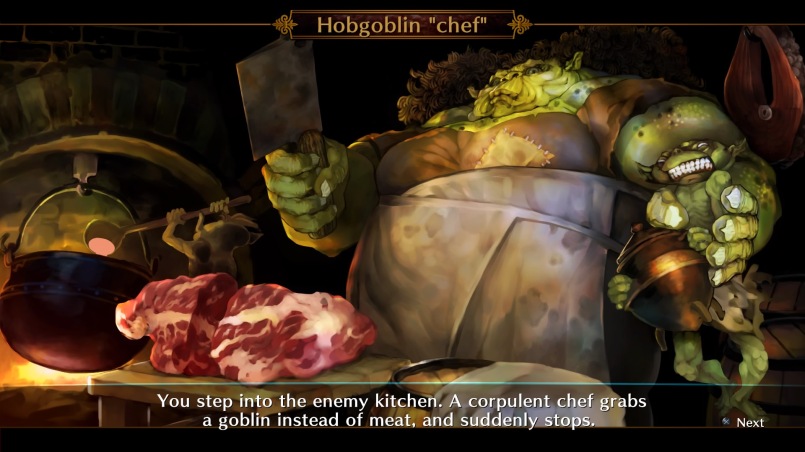 The art style is amazing, hand-drawn and slick. I love it but I’m also not easily offended. There was controversy over this game due to the depiction of its characters — women are almost always scantily clad and out of proportion, and men are also muscle bound meat heads. If you can overlook this, you’ll find a cool story with great music and voice acting, along with fun mechanics that have a lot of replay value. 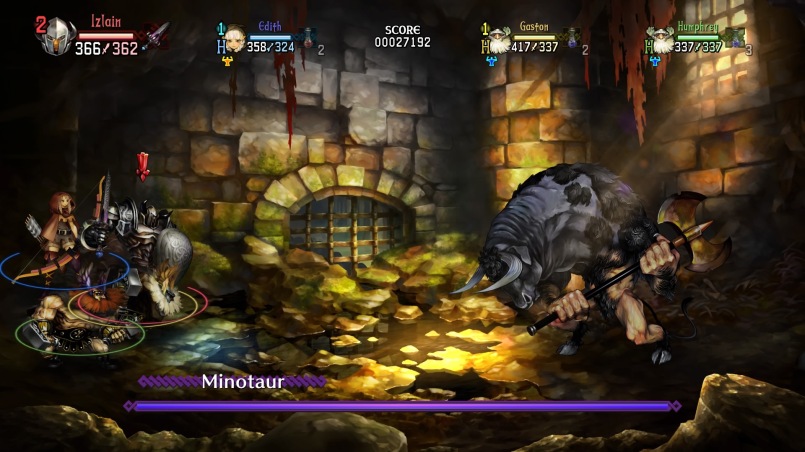 The bosses in each stage get progressively more challenging, and in between story quests you’ll get side quests that require you to revisit areas you’ve already been to. Later on you’ll also gain access to branching paths that expand on previous areas and give more opportunity for stories and loot. From what I remember they had also added in an endless mode or something to that effect, and in that you can level up to ridiculous power levels. Some of the trophies require finishing all of the quests or beating certain bosses on harder difficulties in short amounts of time, so it’s a game that can potentially be played for a very long time.

The skill system is set up with various cards, and each character has their class specific abilities along with those common to all classes. A fair mix of both is probably the best course of action, but you’ll be able to tack on extra effects to your attacks along with making things you pick up give you health or extra points that translate into XP. It’s a well balanced game and each character has interesting skills, though it all really boils down to mashing the right buttons at the right times. Don’t forget to bring healing potions too!

Overall both of these games are worth their asking price, but even better on sale.