I pre-registered for Dr. Mario World on Google Play a while back, and just a few days ago I was pinged with a reminder that the game had gone live. I downloaded it that evening but didn’t play it until a couple of days later. A few things spring to mind when considering this mobile version of the famous Nintendo puzzle game. Firstly, I was surprised to find Nintendo entering the mobile market considering their success with console titles and a monopoly on first party intellectual properties. However, their success with portable game devices would easily lend itself to the mobile sphere, as they wouldn’t need to create hardware for these games, as everyone already has a cell phone in their pocket capable of playing console quality games. For whatever reason though, Nintendo’s prior releases haven’t been all that great (depending on who you ask). Arguably one of the more popular mobile games of all time, Pokemon Go had its time in the sun but doesn’t seem to be the phenomenon it once was. I do have it installed currently because my family plays and I have to participate to some degree but it is definitely not the type of game I would normally see myself playing. Super Mario Run and Fire Emblem Heroes both seemed pretty good, just not really worthy of the Nintendo name. Don’t take me the wrong way, I’m not a huge Nintendo fan as it is, but I was for the first few generations of hardware and have dipped my toes in their offerings ever since, but I don’t really buy their consoles often. As such, mobile versions of their games work for me as well, because I don’t really want to spend the $300 on a Nintendo Switch just to play some Mario (I might pull the trigger on the new Switch Lite that’s coming, but I’m still on the fence). Either way, those games are gone as well, only spending a limited amount of time on my device. I’d still prefer a traditional version of one of these games but I guess the only way you’ll get that is with their flagship console. Anyway, let’s take a look at the newest offering, Dr. Mario World. 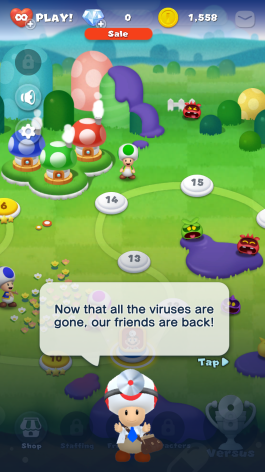 I enjoyed Dr. Mario on the NES, and played other versions as well. It was a solid puzzle game in a genre dominated by Tetris. Let’s get this out of the way — Dr. Mario World really doesn’t feel like Dr. Mario at all. That’s not to say it’s bad though, just to say that it is different enough that I can’t really compare the two outside of the very core thematics. Nintendo as a company has changed drastically since the 1980’s and 1990’s, so I wouldn’t expect a game released today to feel just like a game from thirty years ago, but it’s almost not familiar enough. There’s a loose storyline that translates to viruses poisoning the land and Dr. Mario and friends being tasked with eliminating all of the disease. 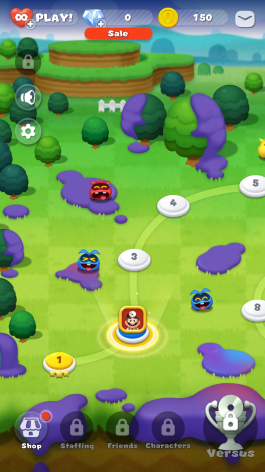 You’ll start with a world map that has a trail for you to follow with levels at each stop. The first twenty levels serve as the game’s tutorial, so you won’t find much in the way of things to do until you complete them. You’ll have infinite hearts with which to do so, and losing does nothing outside of forcing you to try the level again. The game’s mechanics will be explained, and it definitely feels different here in particular. Instead of dropping capsules from the ceiling as has been the norm in puzzle games for decades, instead you’ll rotate and put your capsules onto the playing field from the bottom of the screen, and things float upward. There is a vague sense of these things being thrown into liquid and floating towards the surface, but it’s not really explained why the change in aesthetics was necessary. The rules are otherwise the same in that you must match three or more of the same color capsules/viruses to eliminate them. Other special items, power-ups and hindrances have been introduced, such as turtle shells that clear a whole row when matched or viruses frozen in ice that need to be effectively cleared twice. It does add some variety to an otherwise solved format, and honestly it feels like its in a pretty good place, it’s just so much different that it’s almost off-putting at first. Still, I managed to finish the game’s tutorial in one sitting and then some additional options arise.

At one point during the tutorial you are able to choose different doctors besides Mario. Koopa and Peach are options, and I’m sure there will be additionals added to the game at some point. Beyond the doctor selection, you’ll also get access to two assistants who are basically passive effects — the initial Goomba assistant provides a 1% bonus to your score after clearing a level, this helps with gaining stars on each level. Daily quests will earn you gold, and gold can be used to buy some of the power ups, but also other characters that can be used to play the versus mode. There’s a ladder and the game works basically the same as versus modes in other puzzlers. You’ll have to move quicker than your opponent to drop in extra viruses and things to mess them up, but they’ll be trying to do the same to you. I lose my initial matchup but I’m not exactly pro at the game yet either. A friend system allows you to send extra hearts to each other, as that is the time-gating mechanic for this mobile title. You can only hold so many though, so you’ll want to use up those hearts so friends can send you more.

Overall it seems like a promising title. I enjoy puzzle games but they tend to get stale after a while. The campaign seems to be long enough to keep you engaged, and I’m sure there will be other updates to take advantage of free-to-play monetization. I’d check it out if you enjoy puzzle games, but not if you are expecting a port of the original NES titles.