As of August 1st, spoiler season for the new Commander 2019 preconstructed decks has begun. Gen Con is going on, and Wizards is there — information was promised at a panel yesterday, and supposedly there will be more information given today as well. Next week we’ll get the full deck lists one at a time for four days. My plan as I laid out in yesterday’s post, is to report on the new information each day we get it, so today’s post focuses on what we learned yesterday, and I’ll have more to report after the panel later this afternoon (probably tomorrow’s post). That also means next week I’ll have four posts about the individual deck lists as well. With that said, let’s dig into yesterday’s reveals:

So far, we’ve been shown the box art, names of each deck and the face cards. Each of these new commanders has its own signature spell or companion creature similar to the cycle from last year’s product (you’ll know by the name of the card). So we have the Sultai Faceless Menace deck led by Kadena, Jeskai Mystic Intellect featuring Sevinne, Naya Primal Genesis with Ghired at the helm, and finally the Rakdos Merciless Rage deck sporting Anje. Firstly, I’m surprised by the fact that there are three 3-color decks and one that is only two, but I guess it makes sense given these keywords’ prevalence in those colors. Anyway, let’s take a closer look at the new generals:

Kadena, Slinking Sorcerer is a four CMC 3/3, which isn’t too impressive on its own. This is the commander of the morph keyword deck, so of course its other text has to do with the morph mechanic. The first creature you cast face down (via morph) each turn costs 3 less to cast, meaning you can cast that one for free, as the morph rules texts reads that you can cast this creature face down for 3. One free creature per turn isn’t terrible, and then those cards can be flipped in order to abuse other mechanics or surprise with an attacker or blocker. It’s an interesting enough mechanic, but it’s also one that I’ve never really cared much about. It is nice to get that free cast though, and as a bonus you get to draw a card for any morph creatures you play. I can see this being a pretty reliable card draw engine, but I don’t seem morph being a mechanic that will win you games.

The flashback keyword commander, Sevinne, the Chronoclasm is a five CMC 2/2… and that’s just bad. It is essentially indestructible which is nice, and it’s other rules text is only so-so. Basically anytime you cast one of your flashback spells from the graveyard you get to copy it. So there are a ton of copy spell effects in these colors, so I’m sure this can be a pretty decent storm deck given a good amount of mana, but it’s still pretty boring. I’m hoping there are some good cards in the deck otherwise, because this was the deck I was banking on being the one that I would buy first.

Ghired, Conclave Exile is our populate keyword commander. A five CMC 2/5, his stats are okay for the cost, but he does have an ETB effect that gives you a 4/4 with trample so you are actually getting 6/9 on the board for five, so that’s not terrible. As a bonus, if you can give him haste,  you can immediately attack and populate (make a copy of a creature token you control) giving you another 4/4 that’s tapped and attacking. Haste will make this a more aggressive deck, and you actually have access to green so ramping into him isn’t terrible. I have too many decks brewed already that utilize token strategies, but this one is probably the most interesting commander so far. If you’re making other big tokens, you can continue to make more of them each combat, but it’s pretty slow at going wide. I’m curious to see what else is in the box.

So Rakdos is kind of bad in my mind. I didn’t really like the madness mechanic back when it was in standard (and I was still playing standard back then). The thought of always discarding cards doesn’t feel like card advantage to me, but I guess that’s the point of madness, because madness cards typically cost less when they are discarded than if you cast them from hand, so in that way this commander fits the them well. Anje Falkenrath is a 1/3 for three CMC that comes with Haste. You can tap her to loot (discard and draw), but when you discard a card,  you can untap her. This can be broken. If they make the appropriate amount of good madness cards (as I remember it, there weren’t too many good ones in the past) this might be one of the best commanders of the bunch.

Overall I’m not really that interested in any of these face cards, and I remember sort of feeling that way last year as well. However, I do remember last year having some awesome alternate commanders though, so I’m banking on some awesome cards still appearing in these decks. Let’s take a look at the other spoilers we’ve had so far (by the way, Seedborn Muse was reprinted as well): 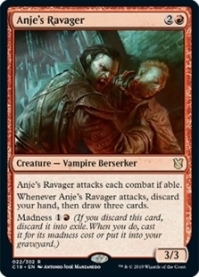 Nothing too exciting here either, though each plays well with its commander, so they make sense to be named after them. Here’s hoping for some new cycles, some good reprints and some alternate commanders that are better than these face cards! We’ll touch base as more information becomes available.