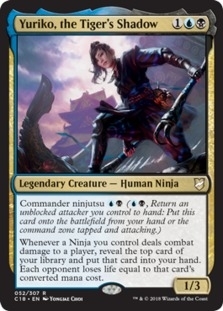 Despite all of the recent hype around here surrounding the impending release of Commander 2019, I still have projects that I’m always working on. Each new set brings with it new cards that can potentially replace older cards in my existing decks, and sometimes a set comes along with enough of boost to a pet project to snowball a deck into fruition. When Commander 2018 was being spoiled last year, I immediately knew that I wanted to build Yuriko, the Tiger’s Shadow. Ninjas aren’t exactly a well supported tribe though, basically only having cards from the Kamigawa block. I still brewed a deck around this commander, but it never really felt like it was where I wanted it to be. There were ninjas in it, there were ways to manipulate the top of the library to capitalize on Yuriko’s ability. There were plenty of unblockables and then enchantments like Conspiracy and Arcane Adaption to make sure everything that wasn’t a ninja would still count as a ninja. This still felt pretty half-assed. Enter Modern Horizons.

I ended up writing a post about my pickups from Modern Horizons, and the extra few ninjas that were put out in that set enabled this deck to feel more on theme. Gone from the original list:

Some of the cards that were removed were due to the fact that they just weren’t on theme enough. Duskmantle Seer is a fine card, but it doesn’t really fit in with the ninja theme, I can’t use ninjitsu to throw it out from my hand, and well it’s a vampire. Ditto Sire of Stagnation, it’s an awesome card but I don’t really feel a lone Eldrazi is the way to go. I also had some light sacrifice theme stuff going on in the prior build that was no longer relevant, so I have removed Grave Pact, Fleshbag Maurader, Viscera Seer and Merciless Executioner. Copy effects sounded okay, but Sakashima’s Student is a little pricey, and I had some budget constraints to stick to if I wanted to build this deck before my Vegas trip. I dropped Evil Twin as well, opting to go for more theft effects rather than copy effects. Patriarch’s Bidding was also cut due to the budget, though I did splurge on Sensei’s Divining Top because it is basically required. I also dropped Palace Siege (was in for recursion but isn’t very efficient) and Tetsuko Umezawa (she’s great and all but I felt another ninja would be better in her stead). 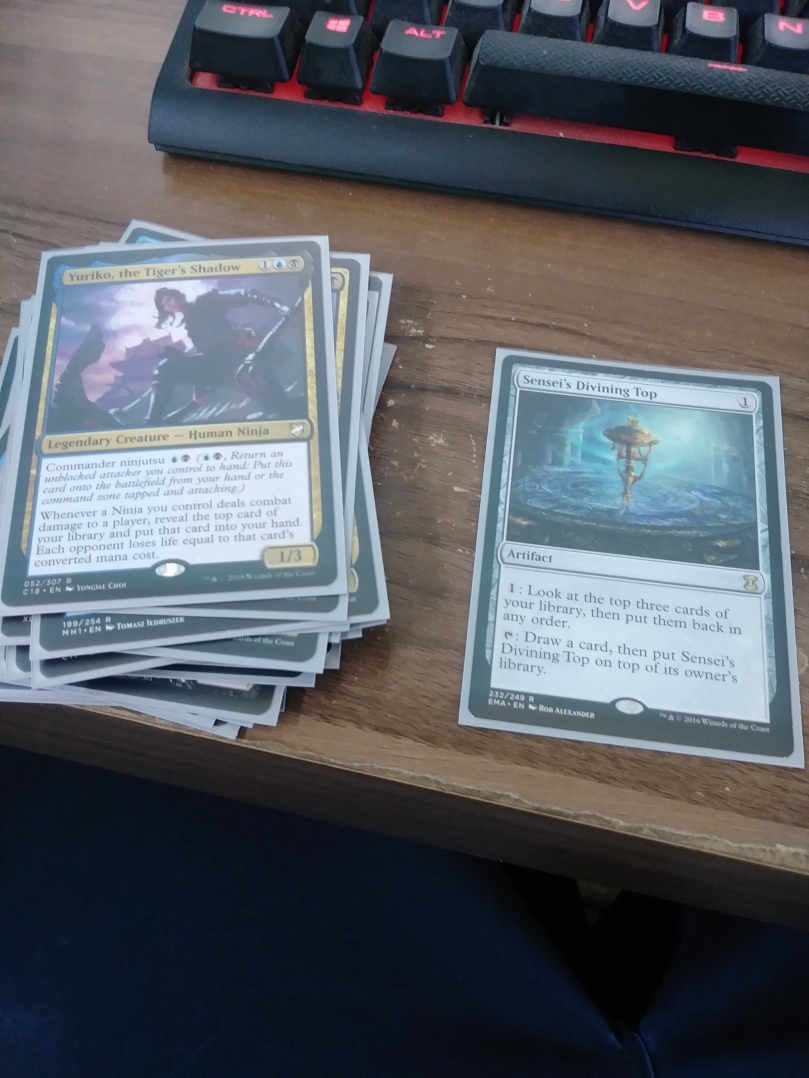 New cards that were added were mostly from Modern Horizons, including:

These cards were a given, due to all but one of them being a ninja outright. The Changeling Outcast is a shapeshifter, but counts as a ninja without needing enchantment help. It’s also unblockable so that’s on-theme for ninjitsu tricks. The rest are pretty obvious inclusions, while Cunning Evasion is a double whammy in this deck. Not only is it protection for our creatures that can’t get through unblocked (allowing them to be returned to our hand if they are blocked) it also can fill our hand back up with ninjas that can then be dropped back onto the battle field if we have some creatures that get through unblocked. It’s cool stuff. Other notable new inclusions are:

These cards were put in while I was finding a better mana curve. The first is a new tutor from M20 that allows you to pick another player to give a tutor to while you tutor up something as well (cards go to top of library). A great political tool and way to set up for big Yuriko triggers. Notion Rain is a pretty decent common from Ravnica that gets you two cards and some selection with surveil. Aminatou’s Augury is a bomb and I don’t know why I didn’t think of using it sooner. You get to exile 8 cards, ramp by throwing a land onto the battlefield, and then potentially cast 3-4 cards for free. Future Sight is also a no brainer for top deck shenanigans. 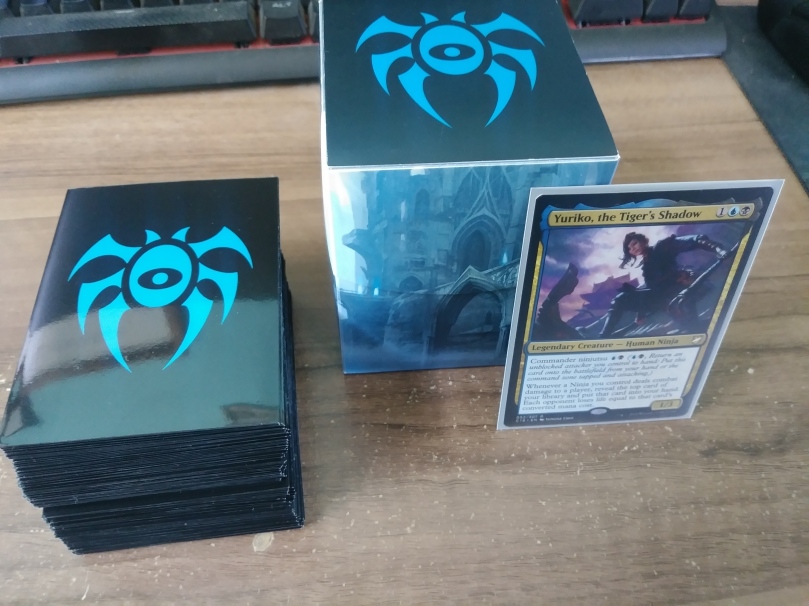 The deck is finally done and playable, and I can’t wait for Vegas to try it out. Here’s the updated deck list.