Being a connoisseur of all things Magic: The Gathering, it should be no surprise that I’ll try out just about anything relating to the IP. Though I didn’t care for other mobile titles like the Duals games or the match-3 title that I can’t recall the name of, this one seemed like it would appeal to me mainly because it didn’t rely on MTG to determine it’s path. Instead, it seems like a copy of other games I’ve played in the past with an MTG skin tacked on (which is what I expect when we get that new ARPG in development — Diablo with an MTG skin). In some ways, an appealing base concept then layered with a design that I enjoy (the art/world of MTG is amazing) should equal a good game, right?

Magic: ManaStrike came out of left field. For whatever reason Google Play decided to ping me that the game had released today. Being my day off, I had been lazing around in bed and looking at my phone, so I thought I’d download it and give it a whirl. It turns out, it is a pretty decent game, though I went into it filled with doubt. There is a tutorial that gets you familiar with the controls and systems, but after that it’s straight into PvP matches, just like the games it took inspiration from. If you can’t tell what games I’m referencing by looking at these screenshots, you must not have been paying attention to one of the biggest mobile titles around. 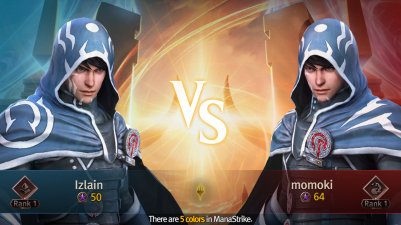 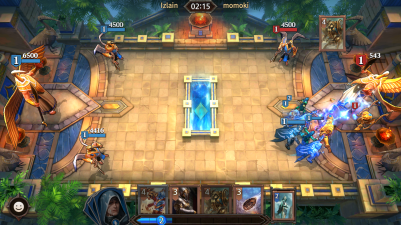 I’m sure you’ve got it by now, but I’ve written about one of these games extensively, but also made comparisons to a PC title that I enjoyed, and Magic: ManaStrike seems to be a meld of the two. Yes, this title plays just like Clash Royale in that you have two lanes and place cards on the field in real time, but then the creatures you create will automatically battle based on a set of rules. However, the game looks much more like Minion Masters in that the field is horizontal and instead of towers there are creatures that act as such. A new feature that neither of those games had is the ability to call down a Planeswalker, and depending on which one you choose, they have various abilities when entering the battlefield, while also having different active abilities. It’s like Clash Royale if you had a hero card you could use periodically through the game (a good thought too, I’d like to see that in CR). A leaderboard exists where you’ll rank up and move on to fight opponents more in line with your abilities. I played several matches in a row and managed to hit rank 2, and afterwards started playing against people who actually put up a good fight whereas I started off steamrolling everyone in my way.

Monetization seems to follow the norm. There is a battle pass called the “Magic Pass” which allows you to earn extra rewards on top of what you would earn by playing for free. There are two currencies, gold and gems, which allow you to buy new Planeswalkers, buy copies of cards and of course you can spend real money to get more of these currencies for use in game. It seems fine, I don’t see the need to spend money either, but I suppose if I play it long enough that could happen. Upgrading your cards keeps you more viable in battles, and you’ll earn packs of cards at a pretty rapid clip. After acquiring a set amount of copies of a card, you can then level it up, much like you do in Clash Royale. It seems to have taken the best aspects of multiple similar games and layered it with real magic cards to keep the lore straight for the fans. I like the concept and I enjoy this style of game so perhaps this one will find a long term home on my phone. Time will tell, I suppose.