Magic: The Gathering has been on the uptick in my house as of late. I have fully settled in to the PlayEDH Discord, and have played a few dozen games to this point. I’ve found that I can typically get online after I pick my son up from school and play at least a couple of games by the time the little lady gets home and we do dinner, etc. As such, I’ve been playing almost daily. When joining the Discord server, they have a little welcome message that directs you to one of their bots that allows you to sign yourself up for various channels the server has to offer. For instance, there are general chats and things to do with MTG, some off-topic rooms, and then the meat and potatoes: Battlecruiser, Mid, High and Competitive tags. Once labeling yourself, you gain access to the corresponding chat rooms where you can look for groups to play with. In my playtime there, I have spent the majority in Mid_LFG, but I have dipped my toes into the High_LFG room to test out my more competitive decks. With a rather large community and new people joining all the time (I’ve seriously run a handful of people through their first game), there are a variety of scenarios you can find yourself in. The standard setup is a pod of four players, but I’ve played with three. You can play bigger games but you’d need a paid account to something like Whereby so that you can see more people’s cameras. Despite being a server dedicated to EDH, people sometimes venture off into other formats. Once such format that I never had the opportunity to play is Planechase.

Planechase was a supplemental product that came with Plane cards that are basically random modifiers for the game. Originally released in 2009, there were four precons that each included 10 Planechase cards. Another set of these came out in 2012, and later the Anthology combined four decks with all 86 of the Planes. This was a multiplayer format that was designed around 60 card decks, but of course, people have made the transition over to EDH, but otherwise follow the same rules when it comes to the Planechase cards. The other day I was hanging out in the Discord and someone mentioned something about playing Planechase EDH, and I was intrigued so I agreed to join in. Before we started the gentleman gave me an introduction to the format.

It turns out the guy had an app on his phone that contains all 86 of the Planes and essentially shuffles them up for you and draws them at random as needed. He went on to explain that the Plane is a static effect that affects everyone. In our above example, we initially Planeswalked to this world, and as such we started the game with the top cards of our libraries revealed, BUT we could also play cards from ANYONE’S library. Crazy stuff. Then, on each turn you can roll a die to attempt to Planeswalk to a new Plane. The initial sets had special dice for this action, that had a symbol which causes chaos. The chaos roll would cause the bottom line of rules text to trigger, which in the case of Windriddle Palaces, we would all mill ourselves for one car. In order to keep things fair, you can only attempt a roll once per turn, unless you are willing to pay a cumulative 1 mana to roll again. We didn’t have the official die, so instead we said roll a d6, 1’s are Planeswalk and 6’s are Chaos. It worked out well, though we were stuck on this plane for quite some time. Later, we’d walk several more times. 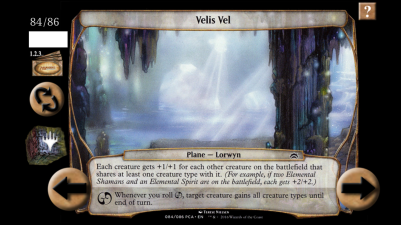 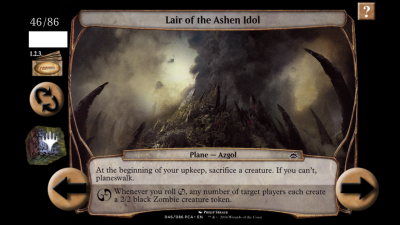 The variety of effects that can occur passively via the Plane itself, and via the chaos rolls made for interesting gameplay. Some Planes will be more beneficial to some decks while some help everyone and of course some are to everyone’s detriment. I don’t think it’s the type of thing I’d want to play all of the time, but it was something new and a great first experience. I didn’t win the game but it was still rewarding because it added another layer of complexity and I dig that. I went ahead and downloaded the same app the other player was using (which is also how I got these screenshots for ya) so I have it available to pull out the next time I’m looking for something a little bit different. This is what I love about MTG — the sheer amount of endless possibility that it brings. No two games will ever be the same, and it’s constantly changing and adding more depth. It’s my MMO at this point, and I wouldn’t have it any other way.