I didn’t hear about Blasphemous upon its release last year. I also am not typically looking for Metroidvania style games to play — I enjoy them, but few do much to set themselves apart from the crowd. Recently the Playstation Store has been hosting a “Mega March Sale” and with much of the world on quarantine, it was a perfect way to pick up some games on the cheap to have something to do while social distancing. It also turns out that this game does set itself apart in ways I didn’t expect, in that it has combined elements of those games that have come before but has done so in a way that appeals to modern gamers. So yes, it’s a side-scrolling hack n’ slash game, but it does have check points, more interesting combat that evolves over time, and a fantastic art style reminiscent of the Atari/Amiga era of the 1980’s. Examples: 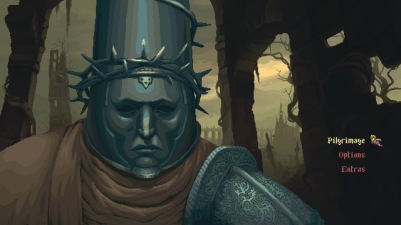 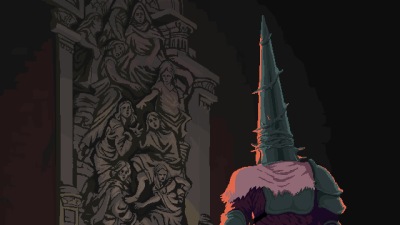 Thought this is pixel art, it’s very high res and the animations are smooth. Back in those early days these images would have been still with very little animation, whereas these are full on cutscenes done in this fantastic artwork. But, I understand that this isn’t for everyone, so your appreciation may vary. Blasphemous is also a rather adult oriented game. There are religious influences along with blood and gore. I’m assuming there might even be nudity, because it’s already come close, but whatever the case the aesthetic works very well for me. When you’re actually playing the game, it looks a bit different, but is still pixel-perfect: 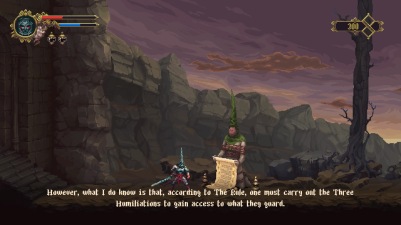 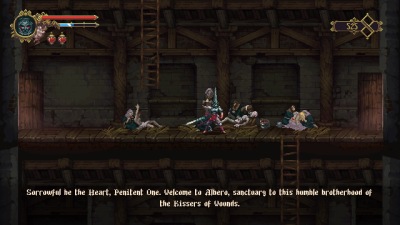 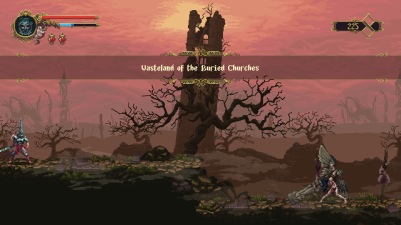 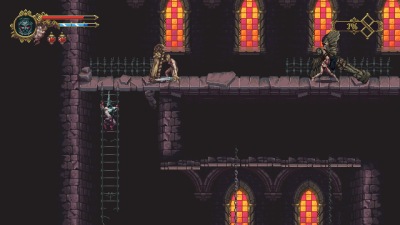 You’ll meet a variety of characters, mostly in various states of unrest. There is a small safe area that is functionally a town, where you can save your game and use the currency to make upgrades to your fighting skills, along with infusing your sword with additional properties. It turns out there is quite a bit of progression when it comes to this, as various skill/item trees exist in the menus. Your sword gets Mea Culpas, your magic spells are called Prayers. You’ll also collect prayer beads that give valuable passives, and there are some items that increase your health, the number of health potions you can carry and your magical energy as well. This is reminiscent of the Souls games in that your only fail safes are the couple of potions you can carry, and refilling them and saving your progress only happens when you visit the shrines that are pretty well spread out.

The combat is also more than just button mashing. You have the standard sword strike, and it chains up to three times. You can duck and jump swing to hit differing enemies, but eventually you’ll run into those that have wide swinging arcs or other defenses, and will have to either slide past them or parry into riposte. These things all make more sense when you’re playing the game, but each set of enemies comes with their own challenges. Death comes early and often. Upon dying, you’ll also drop your soul, and the guilt of losing that energy weighs upon you. Finding the soul in the world where you died will gain you back the favor and whatnot that you’ve lost.

Really, if I had to make comparisons to other games, this is the 2-D version of the Souls games, but also more reminiscent of Castlevania II: Simon’s Quest. I feel the back and forth nature, along with little baubles to collect and side quests that aren’t really very defined fits the mold of that game. The gothic design of the game helps as well. Overall this was a very pleasant surprise of a game and I’m glad I picked it up. If you’re into this style of game you’ll definitely want to give it a try.