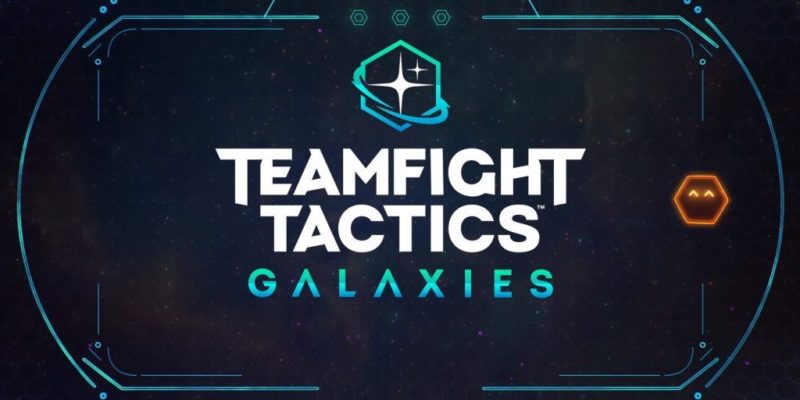 So it’s been a while since Teamfight Tactics officially went live, and since then I dipped my toes into the game with their Elemental set. I had only played the game once prior to that during the beta, when the original set was introduced, and honestly didn’t know what would change with this game nor how often these changes would occur. I had also basically written off the genre after I wasn’t really intrigued with DOTA Underlords or Teamfight Tactics in its earliest form. When friends convinced me to give it another go, I found a surprising amount of fun could be found while not really controlling the action. I suppose this should be common sense, since people have been playing idle or clicker games for years now, but those styles of game rarely appealed to me on a personal level. Regardless, I managed to play enough to start to understand the rules, the champions available, their classes and item builds and then jumped headfirst into ranked. During that season (which are rather short) I climbed from Iron to Bronze, but abruptly the next set was released and progress was reset. The next new thing? Galaxies. 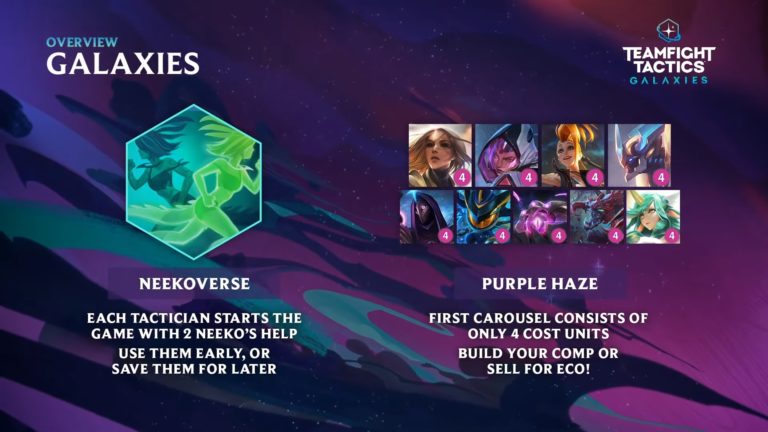 The previous set had a special feature, where certain tiles of the battlefield would be enhanced with buffs that would apply to whichever champion you stood upon them. This time around, those tiles are gone, replaced by a random chance to enter into a different galaxy for that game. Above are examples, and honestly I don’t even know if I’ve seen either of these or if there are more of them. I have probably played more games since the new set kicked off than I did last season, so I would imagine I would have seen at least one of them, but honestly there is so much new information to absorb after a reset, I couldn’t tell you if I have. 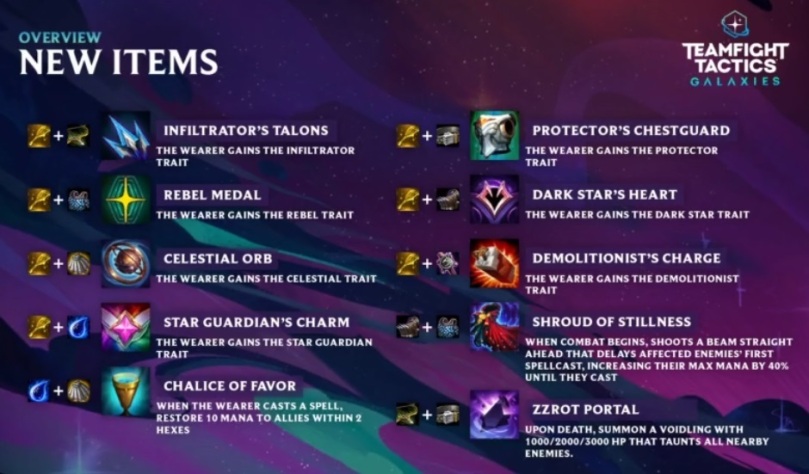 New items were introduced that can help you to get to those higher origin/class tiers faster, along with a couple that are utility oriented. Having used both the Shroud and the Portal, the Portal is the better of the two but the Shroud still has its uses. I like putting it on my tank that has an item or two by late game or is level 3 and it’s effectively a guardian angel. It’s really good. The others rarely pop up in the carousel and you don’t get spatualas often either so you’ll see less of them. 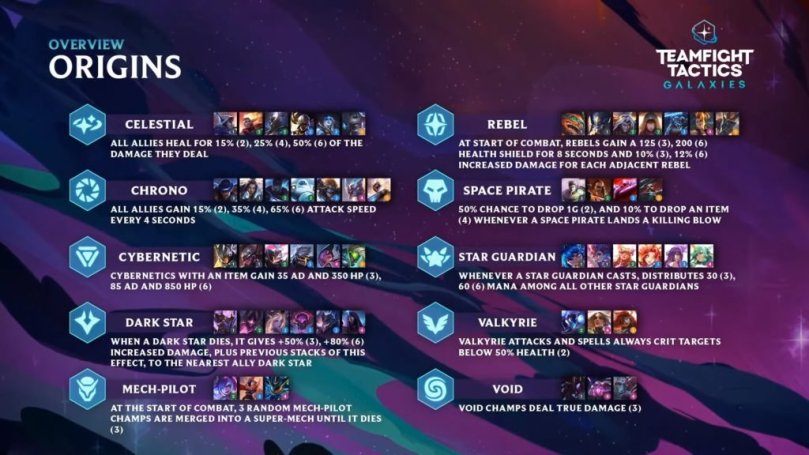 Just when I started to understand which origins and classes worked well together, they switched things up on me. I have managed try most of these to the minimum or 2/3 that they need to go online, but have pulled together a Mech Pilot team one time, a full squad of 6 Chrono and Star Guardian. I really enjoy Chrono because it grants attack speed across the board, so if you have a couple of other strong champions that don’t quite fit they still benefit from the attack speed. Speed = more mana = more spells = more DPS. Fighting against Mech Pilot comps feels shitty but I actually got crushed when I ran it so I guess I didn’t have the proper support. 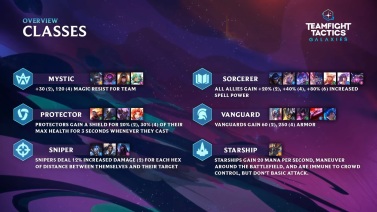 There are some similar classes this time around, but a couple of others that do something a little different. Snipers only require two units, and actually stack quite well with Chrono. Vanguard is a solid choice too even if you only get to 2 units. Starship basically replaces Alchemist in that the character runs around aimlessly, but has a powerful ability. Infiltrators are basically Assassins. Blademasters function mostly the same. Overall the bigger changes occurred with the origins, and many of these I haven’t fully delved into due to having other preferences. 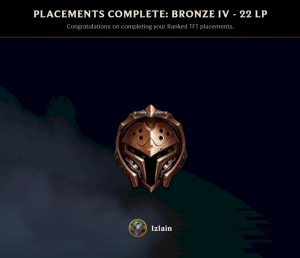 Anyway, as I said I’ve been playing more often now than I had been mainly due to being home basically all of the time. I’m really starting to enjoy it as well, after learning more about the new abilities I felt confident I could get further in ranked than I had previously. I managed to come out of my placement matches in the same spot I had ended the prior season on, so there was nowhere to go but up! Since then, I have played a few more rounds and managed to get my first victory of the season (with the aforementioned 6 Chrono 2 Sniper build) which promoted me from Bronze IV to Bronze II. I think I’ll be able to run up to Silver at least before the reset. Looking forward to trying, and I’ll check back in the next time we have something new to tackle.