The next Magic: The Gathering set is called Ikoria: Lair of Behemoths and is a new plane filled with giant beasts (among other strange things). Preview season has kicked off, and that means a multitude of things. First off, there’s always a post on the Mothership about the new and/or returning mechanics of the set. You can read that over there, but I’ll be going over them individually along with adding some of my own commentary. Additionally, various YouTube content creators will also be unleashing a ton of new videos centering around these new mechanics, new card previews and discussions about the set. We’re also getting the brand new Commander 2020 sets releasing alongside of Ikoria, so even more spoilers are coming down the pipeline than usual. As was discussed in a post towards the end of last year, when we were looking forward to what 2020 had in store for the game, we’ve already known about Commander 2020, the additional Commander decks being released besides the other major set releases, and the Commander Booster Box set (that doesn’t even count how good Mystery Boxes were for Commander players) coming towards the end of the year. Needless to say it’s “the year of Commander,” and we’re in full swing. As such, I am planning on making separate posts with spoilers for the Commander 2020 precons along with the main set, but I do want to just focus on mechanics for this post. One caveat to keep in mind though: despite spoiler season still rolling out on the normal time table, there has been a delay in the actual release date for these new products, pushing them back about a month to May. This is probably for the best since many players have taken hits to their income, but hopefully many of us will be back to work come that time. With all of that said, let’s get into the mechanics of Ikoria.

One of the more interesting past mechanics that is making a return is Cycling. Cycling is a neat ability stapled onto a variety of cards that allows you to pay a mana cost, discard that card from your hand and then draw a new card. Decks that typically want to run a lot of cards with cycling are those that care about drawing cards, so the Locust Gods and Nekusars of the world. I personally only run cycling cards in my Locust God deck, but I’ve had a building interest in turning my Doomsday Zur into an Astral Slide version that wants to cycle a lot. I have a feeling with an influx of new cycling cards coming with this set, that deck might get that much better, or perhaps there will be more options to build in other colors. We already know there’s a cycling focused precon and it already looks pretty spicy. I expect a high number of cards to have the ability itself, along with many new “cycling matters” cards like the one spoiled above. If you can cycle to get draw value but also gain other effects, it can be pretty busted.

Counters have been a thing in Magic for a long time, the most common form being +1/+1 counters, although -1/-1, infect and loyalty counters are getting up there in frequency. Never before has a creature been granted flying via a token though, and that’s where this is a unique mechanic although only really broken in certain circumstances. So normally creatures would be allotted flying from another creature only if that creature remained on the battlefield. Giving a sense of more permanency, these counters mean that even if the originating creature giving the keyword dies, the remaining creature with the counter still gets the benefit. They’re semi-permanent enchantment auras, and that’s pretty cool. But what if you can move counters from one creature to another, or perhaps even remove these types of counters to draw cards or something else exploitative. They’ve already said these counters won’t stack, so proliferating them isn’t powerful — until they print a card that turns this ability up to ten. Whatever the case, a combo has already been discovered with a creature that gives returns a creature without a counter on it who dies to the battlefield with a flying counter on it, but if you have Solemnity on the board that basically reads: if a creature you control dies return it to the battlefield. Pretty cool stuff. 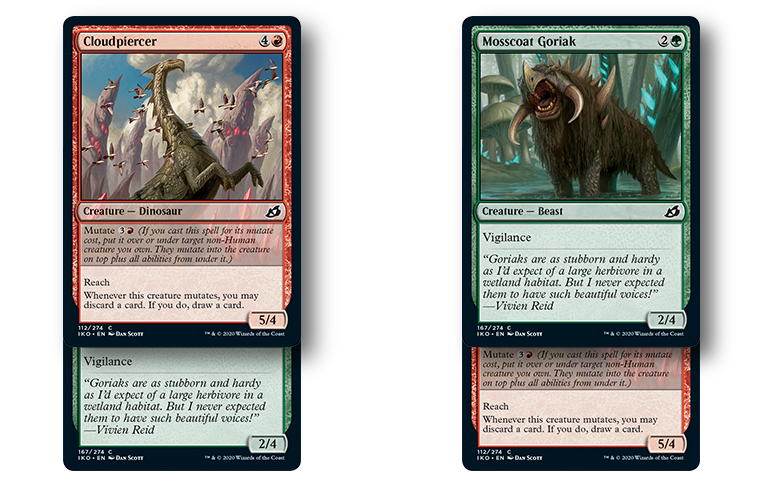 Mutate seems to be WotC’s way of trying to revive the meld mechanic from Innistrad while simultaneously bringing the mashed up creatures of Unstable to standard play. You’re essentially putting two creatures together to get a mash up of keywords, and sometimes when mutating a creature you’ll get additional effects upon doing so. The main consideration when thinking about mutating creatures is what that extra ability might be, and how you’d like to stack the creatures, as you’ll only get the power/toughness of one of them, dependent on which you put on top. In the example above you’ll see what I mean, in that you either get a 5/4 with the additional Vigilance keyword, or you’ll get a 2/4 that gains reach and the mutate ability. However, you can only mutate creatures that have the mutate alternate casting cost, so the Cloudpiercer above is needed to make the meld. It’s an interesting idea but sort of gimmicky and even though I know one of the commander precons will attempt to build a deck around this concept, I think it will fall flat sort of like the morph deck did last year. It’s just kind of silly when you only have to Swords one target to kill two creatures.

Companion is another new mechanic being introduced, and it’s already produced waves in the community. There is a partial cycle (known to this point at least) of these cards in color pairings of hybrid mana. They each have a stipulation built into them to allow you to use them in your decks, but they don’t count towards your deck’s card limit. This means you can essentially build 101 card Commander decks with these, and it’s an extra spell in your command zone (almost as if WotC decided to try some Oathbreaker design space). However, before the set has even been released, the Izzet companion card has been banned in commander. The rules committee apparently agreed that the other companions weren’t too broken but this one was. I’m not going to go further into it than that, but it’s still a crazy idea in the first place. The Spike Feeders put up a video where they discussed these in-depth and I thought I’d share that next:

While giving us a new way to include more cards (virtual sideboard, or Oathbreaker style spells in the Command zone) into our decks is a design space I’d like to see more of, these cards are pretty restrictive in their deck building requirements so it’s not quite there yet for me. I feel like I could embrace this more if there were a larger number of companions or cards that use this outside of the game wording to where we could have a virtual sideboard and could then utilize wish style spells effectively. But that’s skirting rules that have been a part of EDH for a long time, so perhaps no one will want to push that boundary. I for one would love sideboards and the ability to use wish effects to target those cards. Anyway, as I said I plan to make posts to preview the main set along with the precons so stay tuned for that!