This column has slowed down a little as of late because of the delay to the release of Ikoria: Lair of Behemoths and Commander 2020. The release of those products was pushed back from April to this Friday, May 15th. As such, I’m still a couple of days away from getting my hands on new cards with which to build decks, and though I’ve already shared a couple of brews that I have intended on making as soon as I get a couple of the new precons, I’m still waiting. I’m super stoked for some of the cards from the main set, but I’m really looking forward to two out of the five new precons, and I think that will get me back to playing a bit more regularly and of course brewing up some new decks. Despite the fact that I’m in a bit of a lull with the game, I did manage to get some time in with two new decks last weekend (along with playing several games with existing ones). One of those I actually brewed on Friday night, put together on Saturday and played a couple of games with — this is the deck we’ll be talking about today. The other is a more competitive one utilizing a strategy I have never tried before — I’m happy to say that it worked pretty well on its first couple of games as well, but I’ll talk more about that one another time. For now, let’s look at another commander from Throne of Eldraine, Torbran, Thane of Red Fell:

When Throne of Eldraine was being teased, I pegged this guy as a must have card for a variety of decks, but didn’t really consider using him as a commander. It turns out that despite not being really into much of Eldraine at that time, that there were more cards I ended up using from the set than anticipated on top of finding a really fun commander in Yorvo, Lord of Garenbrig (whom I might add will benefit from cards coming in these new products). Anyway, I came across a guide that suggested using Torbran as the general of a ping deck, which has generally been thought of as a weak option for EDH. However, once I started looking at synergistic red cards from over the years of Magic’s history, I started to see the potential. First of all, Torbran isn’t a pinger himself, but he definitely supports the idea. With him on the battlefield, he’ll increase the effectiveness of pinging units by increasing their damage output by 2. This means a card that reads tap: deal 1 damage to <target> now says tap: deal 3 damage to <target>. But Torbran doesn’t stop at amplifying pinging creatures, rather he counts all red sources of damage — something red has had added to its suite of burn in interesting ways over the years. First up, let’s check out our army of pingers. 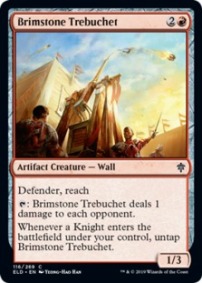 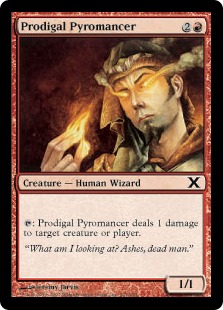 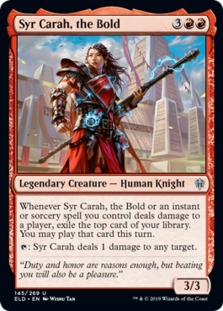 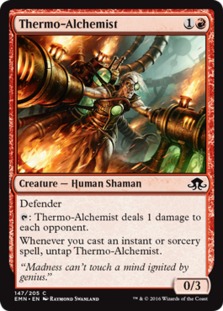 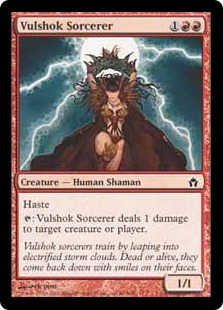 Each of these creatures will tap to deal 1 damage to a target. Sometimes the target is a creature, sometimes a player, sometimes all opponents, sometimes all players. Some have haste, others have defender, but they all will eventually be able to lightning bolt at will. Three cards of note here are Chandra, Fire of Kaladesh, Goblin Sharpshooter and Syr Carah, the Bold. The first is one of the original flip walkers, and while being able to ping for only 1 damage herself, with Torbran on the board she will immediately flip int a viable planeswalker that can still do damage. The Sharpshooter is tricky to use, but is part of some combos that I didn’t originally include in this build but might at some point. Still, with him tapping for 3 damage with our commander, we should be able to activate him more than once in a turn. Combos with Kiki-jiki and Splinter Twin (also Zealous Conscripts) might be added as finishers but so far I’ve liked the way the deck has performed without being too combotastic. Lastly, Syr Carah is also from Eldraine and while she is a pinger as well, she also allows us to get some value off the top of our deck, which is certainly welcome in red.

Other Forms of Damage Over Time: 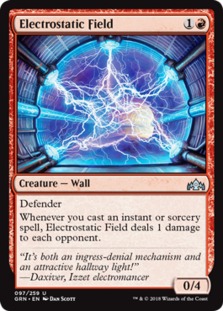 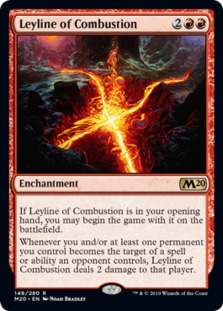 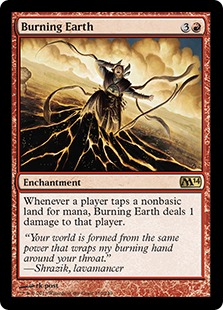 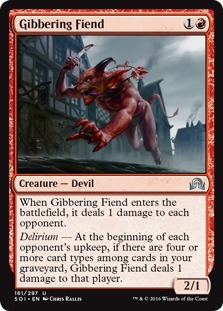 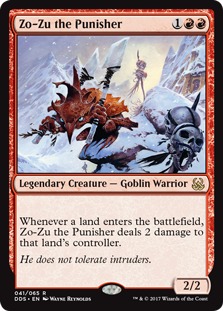 So the meat and potatoes of our strategy is to burn our opponents down faster than they can kill us. Doing it with the pingers we’ve gone over can work, but it’s going to take some time. As such, I’ve added a slew of options that will punish our opponents in their own ways. Casting spells? Electrostatic Field and Firebrand Archer will do damage just for casting them. Playing creatures? Purphoros will do 4 damage to each opponent with Torbran on the field. Playing lands? Tunneling Geopede will shoot lighting bolts for doing so. You get the picture. We’re trying to make sure that no matter what we’re doing and no matter what the board state is, you’ll still be slowly whittling away your opponent’s life totals, and at some point should be able to threaten wins. In my first game with the deck I managed to get out Purphoros and a Sulfuric Vortex, so I was dealing 4 damage a turn to each of them while only taking two of my own, then dealing more damage by playing creatures, and I didn’t even get the fun stuff like Ancient Runes or Burning Earth. Zo-Zu the Punisher also looks like a ton of fun. 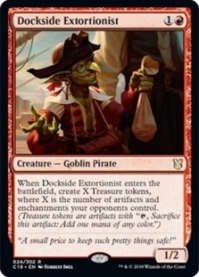 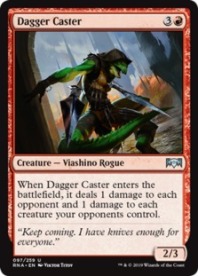 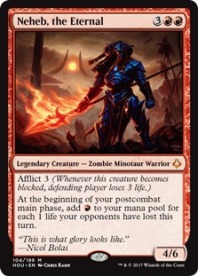 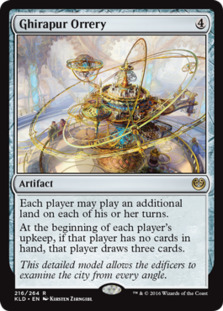 Since it’s red, we have a few ways of making a large chunk of mana. As such I included cards like Electrodominance, Jaya’s Immolating Inferno, and Comet Storm as potential finishers off of a big swing of a turn. Dockside Extortionist can give you a bunch of treasures at once, Neheb the Eternal is a mana engine, and mid to late game Mana Geysers can net a ton. We also have Past in Flames to get back some of these spells if we need to later on, while Outpost Siege is extra card advantage. The version of Chandra I included is also pretty busted, simply because she can’t be countered and immediately gives our opponents an emblem that deals them damage each turn, which is perfect for this deck. Since we aren’t running board wipes due to having lots of ways to remove problematic creatures with our pingers, I’ve included some in the form of creatures that when paired with Torbran essentially end up being partial board wipes on top of doing damage to our opponents at the same time. Lastly, Ghirapur Orrery can help us ramp but that effect is symmetrical. However, if you find yourself with no cards in hand (as many red/burn decks do) we get to draw 3 cards which is likely going to help us more than our opponents. Plus it’s about the only nice thing this deck does.

In testing it has worked well, but I can suggest adding Kiki-Jiki, Splinter Twin and Zealous Conscripts if you’re looking for a way to end stalled out games. I may do so myself.