Today some big news came down from the mothership. The majority of releases and plans for Magic: The Gathering for the rest of 2020 was already pretty much laid out: We knew about Core Set 2021 coming in the summer, Zendikar Rising in the fall, and the Commander-focused booster set coming towards the end of the year. Other supplementals like Spellbook: Chandra and some similar product focusing on green cards along with the Jump-Start product have already been announced as well. I honestly didn’t think anything else could be crammed into the year, but that changed this morning.

So at the end of 2018, the last masters set “for a while” was released. Called Ultimate Masters, it was one of the best masters sets to release in a while. The original Modern Masters sets along with Eternal Masters were all well received and packed a bunch of value, while Iconic Masters and Masters 25 were perceived as flops. I had good luck with all of the masters set packs I purchased over the years (starting with Modern Masters 2017) but I do see where there were less “good” cards in those sets. So WotC decided to go out with a bang, releasing Ultimate Masters and saying that the product line would go on hiatus. A year and a half later, here we are getting an announcement for a new masters set, called Double Masters. It’s a pretty uninspiring set name, and honestly could have been spruced up a bit, but when you read on you’ll see the reasoning.

Double Masters will be available on Magic Online starting August 6 (ONE day early!) for $6.99 per booster. It will not be redeemable.

This bullet list gives us a ton of information without saying much at all. It’s a pretty standard set size, along with having the standard lower pack count than a main set release, which should lead us to believe they will retail for $250 or so a box given the typical $10 a pack price point. Since WotC has done away with MSRP, it’s anyone’s guess how much actual pack/box prices will end up, especially if we’re still dealing with COVID-19 complications for production and shipping which leads to shortages and artificial inflation. This happened with Ikoria/C20 products despite WotC delaying physical release by a month. I’ve had conversations with people who don’t have an LGS and got scalped buying product online, and those who couldn’t find the product they were looking for a box stores. I was fortunate to get C20 at my local Wal-Mart for normal price ($40 each), and pre-ordered a fat pack of Ikoria for a normal price off of Amazon, but it did affect some nonetheless. Where we start to see the pattern change, is in the pack contents: Two rares and two foils per pack, so the potential for up to four rares in any given pack. That’s not gonna drive the price up at all, will it?

While the Mystery Booster product did give us many important reprints that brought the price down on some more expensive cards, many of those cards have already leveled off, and some cards that I bought within the last few years have recently spiked by 100% or more, so the need for reprints is ever present. Masters sets have always been a good device for providing reprints and bringing down some of the ridiculous prices that cards can garner, but because of the reserve list, some cards will simply never be reprinted and will never be affordable. Thankfully the PlayEDH Discord community is proxy-friendly, but WotC is not building financial sustainability when cards become prohibitively priced and Timmy on the Internet is just going to print out copies from his home computer. This, like Mystery Booster and other masters sets before it, has the ability to provide needed reprints in a more affordable manner, along with building security for the company from pack sales. I’ll still buy this product even if it doesn’t have my most wanted reprint, but we want more quality sets like Ultimate Masters and less of whatever Masters 25 was. 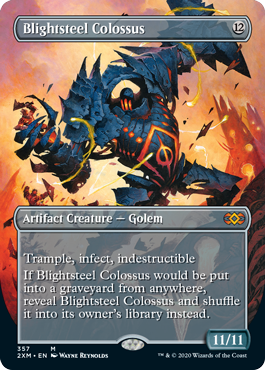 Two reprints were officially spoiled, though the set doesn’t release until August, and we’ll get the proper spoiler season in July. As is becoming a standard thing, box toppers (full art alternates) are included and we’ve seen two of them, though I’m not sure if there will be more added to the pool. Blightsteel Colossus definitely deserves a reprint as it’s been creeping up in price for a while, but Doubling Season was reprinted not long ago in Battlebond, so I think there were better options (I still want another reprinting of Mana Crypt dammit!). Either way the art looks nice and they’re good cards to have. I hope the rest of the set has a good amount of cards on this level, and it should have a large pool or rares since we’ll be getting two a pack. Thankfully there should be less chaff to dig through.

WotC made sure to get in the fact that there wouldn’t be fetch land reprints in this set, but they said they are coming this year. I imagine they won’t come with Zendikar Rising because it’s a standard set and I don’t see them putting those lands in the standard environment, so my money is on the commander booster set, where they can immediately say the reprints of those lands are not standard legal. More on this set when we get to spoiler season in a couple of months.