I realize that I’ve been neglecting this blog, and I still have things that I want to write down for posterity. At this point, my content creation energies are going fully into this other venture, so I have been thinking about what I can do with the blog in the meantime. I can say confidently that at this point in my life, I’m not going to dedicate sufficient time to blogging anymore. I’m fully invested in other forms of content creation, and given my schedule, I can’t do *a lot* with both at the same time. That said, I do want to perhaps use this as a form of self therapy, and also as a way to self-promote at the same time. With that said, this post is completely about my other project: The Possibility Storm.

The last post I made was announcing my new project. At that point, I was using shitty graphics that I made myself, and had just started the corresponding YouTube channel. At this point, I’m over 90 days deep, and I thought I’d share some of the “achievements” I’ve completed to this point. The first thing I’d like to share, is pictured above. I had a friend of a friend who happened to be in one of my early episodes, who also happened to be a graphic artist for his day job, and as a result I was presented with an opportunity to get free graphic design work for the channel. The new logo is fire, and I’m absolutely in love with it. Big thanks to Tallasis who created this for me.

As I said, it’s been just over 3 months since I started the new YouTube channel, and this has already surpassed my expectations, but we’re at nearly 400 subscribers and 1500 watch hours. The channel also has over 10,000 views, and I’m aware of other channels that have been active longer than I that have less views and +\- the same sort of subscriber count. I am well on schedule to make the requirements for partnership at the one year mark. I’m simultaneously proud of this achievement and humbled by the support. To be fair, I have infiltrated the appropriate channels for this growth to be expected. I’ve been very active on Twitter, I’ve been a guest on many a stream of other creators, and I’ve shamelessly shilled whenever the opportunity has arisen. I’m not saying this has been easy, and I know that it’s been work on my part, but I’m very happy with the growth vs. the effort put out. Speaking of support, this has become lucrative in its own right.

I’m not going to pretend like $20+ a month is “raking in the cash” but it’s a good showing for what I’ve done to this point. I’m well on my way to YouTube monetization, and I’m already making enough to cover most “costs” of the production of the show to this point. I of course want to invest into the show as well; getting a better microphone is high on the list, along with perhaps some better lighting and additional cameras for various production facets. I appreciate the support I’ve been shown, and I intend to continue this production and improve it as I go along. 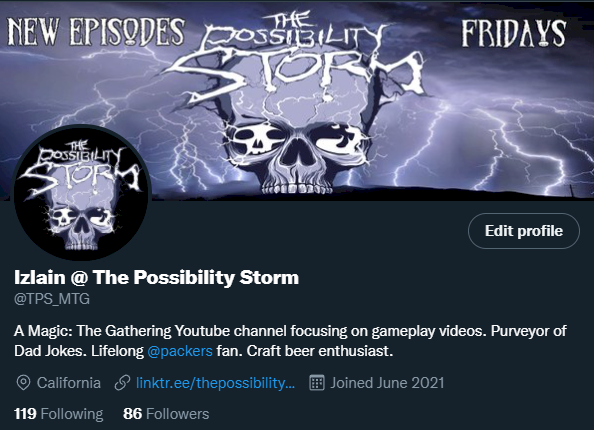 My Twitter presence isn’t where I want it to be, but we’ve managed almost 100 followers and I’m always having conversations with people about MTG amongst other things, and I’ve used the platform to collaborate with many a content creator. It’s still my social media platform of choice, and a great way to interact with the audience.

This project started out as a completely video based feature, but I was also looking to expand in any way possible in order to gain reach and monetization where applicable. As such, I’ve expanded to Twitch in order to live stream recording sessions so that people can either watch the games live, or watch the edited videos later. In some cases the live streams are more entertaining for some, but the quick cut videos are more accessible to get to the end result more readily. We’re pushing the amount of followers to get affiliate status (we’re actually at 30 followers now, despite what that graphic shows), which unlocks the ability to gain subscribers and further monetization efforts. I think between Twitch, YouTube and the Patreon, I should be able to increase production value while simultaneously providing multiple benefits to those who pay into the show.

Another revenue stream I’m looking into is channel branded merchandise. I’ve already had a surprising amount of “I’d buy that if you make it” in this regard, so I’m looking to get these products out as soon as possible. Pictured above is a t-shirt with the awesome logo my buddy made for me. I’m also looking to get logo playmats for MTG made. I’ve looked into several options for mass producing each, and in some cases, we can do batch orders in a Kickstarter fashion, where those who pledge towards the total goal will get a shirt or mat if the goal was made and I’ll make a profit. I’m being completely transparent here, in the sense that I want to create the content, but I’m also open to receiving some cash for the work I’m putting in. In this sense, these are amounts I wish I could have earned for the blogging I’ve done over the last 20+ years. I’m also going to be the first person to rock these t-shirts and have a playmat displayed during streams/videos.

So if you’ve followed me for the past 16 years, I’d sincerely appreciate a follow on social media, the YouTube channel or on Twitch. All of the support helps, even if you’re not contributing monetarily. If you can spare the extra change, the Patreon is at minimum $2/month, and once I hit the 50 follower mark on Twitch, that will open the option for subscriptions there, which are at minimum $5 a pop. For the cost of your morning coffee, once per month, you can help finance the channels I’m producing and I’ll love you for it. You can find all of my content and related socials on Linktree.

Thanks for reading through my shameless self-promotion. I appreciate you all.