The fourth and final Talkback Challenge was more of a questionnaire posed by Joseph Skyrim. He related gaming to the “seven deadly sins” in a clever enough way that if nothing else gives us one more thing to write about. I like clever shit anyway. Your mileage may vary.  Here goes:

Lust – Do you enjoy games more if they have scantily clad and “interestingly proportioned” avatars? Do you like playing as one of these avatars? Why or why not?

As a straight man, of course I enjoy the female form, scantily clad (or completely naked for that matter). When it comes to games though, I’m not really affected one way or the other. If it’s an MMO character generator you’re referencing, or fluff items, etc, I’m all for options. Some people (women included) want to see their characters in something skimpy. Others do not. Don’t limit people’s imaginations for their own characters is my thought. If it’s a game where there’s nothing but scantily clad avatars (males included) it starts feeling less like a fantasy world, and more like a teenagers wet dream.

Gluttony – Do you have a game backlog of unfinished games but still buy new games regardless? Why or why not?

I do, and I don’t know why it started happening. Going back in time, I wouldn’t have been able to afford games regularly, so I would beat the games I owned long before I got new ones (outside of maybe some rentals). When I was monogamous with MMOs for a few years, I didn’t have the time for other games. These days, I play all kinds of games, yet I don’t always finish them right away. Sometimes they sit in the backlog for a while before I get back around to beating them. When something new comes out or I catch a fantastic sale, I pick up a few games, even if I don’t plan to play them right away. I do eventually go back though and beat a game or two from the backlog (or one that I just picked up, if it hooks me right away). I enjoy the variety. I get sick of logging into the same game day after day, so I have to break it up.

Greed – Do you enjoy hand outs in a game? Have you ever opted to NOT do an action / in game activity because the rewards were lacking? Why or why not?

Who doesn’t enjoy a hand out? I’ve taken buffs, gold, been “twinked” and power leveled. Most of the freebies or “login rewards” in recent games have been pretty lame, but I remember veteran rewards from EQ2 being pretty awesome. I have definitely opted out of in game activites because the rewards sucked. If there was another dungeon, raid, pvp event, public quest or other form of getting a comparable or better reward, I was avoiding something that wasn’t going to be much of an upgrade (or otherwise serve an immediate purpose). I’m not going to waste time on something that isn’t enjoyable, and if your whole game is grindy nonsense with a few freebies once in a while, I’m probably not going to stay for long.

Sloth – Do you ever leech or AFK in a party? Do you discourage others from attempting things that you feel are difficult? Have you ever seen someone that needed help, but decided not to help them? Why or why not?

I have never leeched or AFK’d without prior consent. I.E. I need to afk for a bio break, and the group makes a couple pulls without me. I have helped the random passerby in MMOs, particularly in the EQ/2 days. Also helped when there were calls because of other factions nearby or ganking people, etc. I haven’t really discouraged people, but there have been times I’ve not had the time or felt like helping a group/friends/guildies to do something.

Wrath – Ever get angry at other players and yell (or TYPE IN CAPS) at them? Have you ever been so angry to stalk a person around in game and / or in the forums? Why or why not?

I have used caps. But it’s been a while. It’s usually just for emphasis. I have stalked people in game in PvP, because maybe they ganked me or stole the kill I needed for a quest update, or for whatever reason I want, it’s PvP I’m going to kill you for no reason. But going beyond to forums or other places, no. That’s kind of crazy.

Envy – Ever felt jealous of players who seem to be able to complete content you can’t? Do you ever suspect they are hacking or otherwise cheating? Why or why not?

I have felt jealous of people who can get higher than me on leaderboards, or have been lucky enough to finish a raid with a pickup group or a better guild, whatever the case may be. But usually I just keep plugging away and attain what I want, or call it a day and stop worrying about it. I’ve met plenty of hackers/cheaters in competitive games. I don’t think that’s super prevalent in co-op or single player games, so it’s whatever.

Pride – Are you one of those people that demands grouping with other “elite” players? Do you kick players out of your team who you feel are under-performing? Why or why not?

I really prefer playing with people on the same page/skill level as me when I’m playing something that’s competitive. I don’t want a shit team in an FPS or MOBA for obvious reasons, and that’s usually a source of my gaming wrath. Those types of games are designed to be a test of who’s the better team. However, I don’t usually make fun of or talk down to people who aren’t as good. On the MMO side of things, I haven’t kicked someone from a group unless they were just being an asshole or are ninja looting.

And there you have it. The seven gaming sins, Izzy style.

I didn’t do a third entry into the #NBI2015Safari last week, and really hadn’t planned on doing another one but as Murf is now collating lists of the entries for the month, I started thinking I should do another. Murf expressed some surprise when I used a shot from H1Z1 for the Landscapes category, and to this point it seems I’m the only one who has made an H1Z1 submission. As such, I found another suitable screenshot from the game that can land in a different category: the Selfie.

Unlike WoW, there isn’t a selfie feature in the game, and technically this isn’t my avatar. But with my clever play on words in the title of this post, this is now a selfie of Mr. Zombie there. Isn’t he cute?

Oh, you got some red on you!

For my second entry into the #NBI2015Safari aka Murf’s Screenshot Safari, I am going with the “Epic Achievement” category. 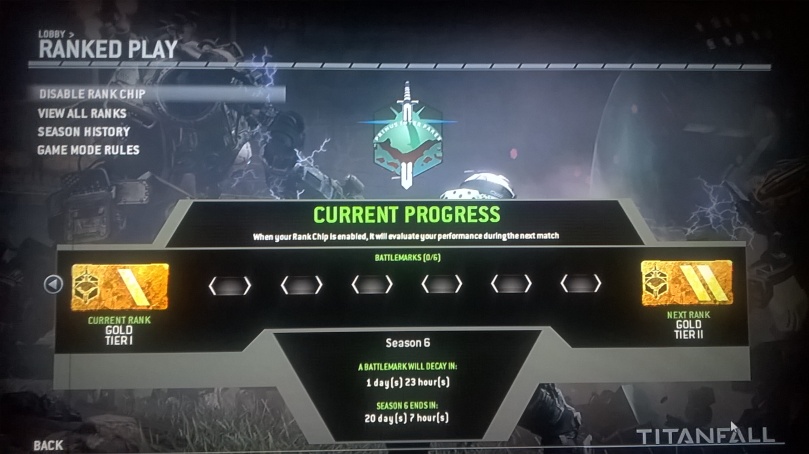 I’ve been playing Titanfall for, oh I don’t know, a little over a month now? At some point (I think it was upon reaching level 30) I was prompted to optionally turn on my “ranked chip” which is a fancy way of saying my kills/deaths/points will attribute to something else aside from merely leveling my account. It doesn’t seem as big of a deal as ranked play can be in other games; there doesn’t seem to be a leaderboard so it’s hard to tell where you stack up against other players. It should also be noted that each ranked “season” is only a month long, so it’s not as if this ranking will go down in the annals of time for all to see. No, at the end of the month things will reset and this achievement will cease to be, outside of that link above that says “season history.” Still, it is a recent accomplishment that I’m proud of, and I’m not stopping, no. I might be able to get even higher before the month is out, and I’ll let you know if I do.

If you play Titanfall on the PC, my Origin account is Built4Sin82. Hit me up if you want to get a game in!

In the absence of Syl in this year’s NBI festivities, Joseph Skyrim has taken up the event typically run by her. This year’s NBI Poetry Slam is focused on gold, or currency of any type, as it pertains to gaming or using real world currency for gaming. Last year I wrote some poetry along with adding a submission that contained song lyrics I had written prior to the event. This time around, it’s a mixture of the two.

The following is a poem I just wrote, but could also double as song lyrics. It’s about League of Legends (go figure) and hopefully the references are apparent. It was inspired and should be sung to the tune of “Gold on the Ceiling” by The Black Keys. Enjoy.

Make sure to kill that Baron

Teemo is also known as Satan

This week we’ve gone back to tradition, in that we are running our standard format that we’ve gotten away from for a few months now. We start with what we’ve been playing, jump into a shorter discussion on the perils of PC to Console (and vice versa) ports, talk about some idiots on the internet, and highlight the 2015 NBI newbies in our community spotlight. There really isn’t much more to say about it.

Izlain
Blog: Me vs. Myself and I
Twitter: @mevsmyselfandi

Idiots on the Internet Articles:
http://kotaku.com/konami-might-have-cancelled-silent-hills-but-contrary-1702535395

Couch Podtatoes is a podcast about gaming, though we might stray into other forms of media. Sometimes we use strong language, but we try to keep that to a minimum. All opinions expressed by us or our guests are our own and are in no way to be interpreted as official commentary from any companies we discuss. You can visit our official podcast page at http://couchpodtatoes.libsyn.com/. Be sure to follow us on iTunes, and/or Stitcher Radio.

Questions, comments and feedback are welcomed and encouraged!